“My Jesus I Love Thee:” Sermon In Song

One thing I love doing is taking old hymns and turning them into sermon outlines. Frankly, many of the old songs of the church were nothing more than condensed sermons put to music. They were not only meant to give us a means to sing praise to God, but to learn of His character, of his goodness and grace.

Last week I explained to the congregation at the church where I pastor that the songs we sing should be known and understood. I mean, how profitable is it if we stand as a group and sing something that makes no sense? What kind of corporate praise can we offer to our God if we cannot relate to the lyrics? It is so much better when we can all stand and sing from the bottom of our hearts the words of a hymn that means something vital to our soul!

The following is an outline which I will be using soon, maybe even this Sunday. The outline is based on the song “My Jesus I Love Thee” by William Featherston (1864).

Please note, Featherston wrote this poem when he was between the ages 11 and 16 (he died age 27, long before the song became well-known). Adoniram Judson Gordon (founder of Gordon College and Gordon-Conwell Theological Seminary) added the melody. How many teens do you know these days who could write something like this?

On a different note, how many teens could God use if they would only let Him?

“My Jesus I Love Thee”

I would love to know what you think of this, especially after you read the biblical references. 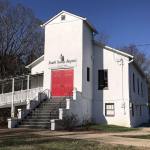 What do you think of topical sermons like this? Expository preaching is something I regularly do, but I also think we need to mix up the delivery styles every so often. Doing it this way – a song sermon – is not only a good way to explain a song, but doing so with Scripture helps reinforce the truth the next time the song is sung.

Head’s up, South Soddy Baptist! You might be hearing this sermon tomorrow morning 🙂

I once saw a cat chase a chicken.

It chased it across a main road.

Through traffic they raced unhalted

Until they stumbled upon a dead toad.

It was flat and wide, not deep.

It hadn’t been dead for long,

And both of them started to weep.

Then before their fruitless chase could continue,

A minivan flattened them flat.
The End

“I Will Not Forget; I Will Remember”

I will not forget; I will remember

That horrible morning in early September.

The sight of the tower, bursting with flame.

The second explosion confirming the name:

I will not forget, though some would like to,

But I cannot un-see the poor souls who jumped to

Their death, rather than burn.

The fight for freedom rests on you and me.

Will we walk gagged and bound into tyranny’s night?

Will we be silent, or will we fight

Yes. And I will not forget; I will remember

The day it all changed in early September.

I Saw a Steeple

“I Saw a Steeple”

I saw a steeple pointing high, lifting my eyes upward.

I felt the pulling of strings inside, calling me homeward.

Inside the doors were welcome sounds, voices full of joy I heard.

And when the Word of God was read, I went forward.

Not a preacher’s hand to shake, or to drop a dollar in a plate,

That the upward, homeward consecration wasn’t over.

Assurance was the welcome sound; the Spirit’s Voice I heard.

So from my knees I stood repaired, repented, marching onward.

I know that  you see me, and you think that I can shine.

But the light is a reflection, which is why I’m called the “lesser.” The brightness that you see is his, not mine.

Had the light you see been coming straight from me, perfection would be all the beam would show.

But here the surface is laid bare before each telescopic stare, made evident each night within the glow.

I do not shine, I just reflect.

Another Day In Court

“I See the Offender”

The offender stands within my sight,

I cannot reach him – I wouldn’t try,

But it’s crossed my mind – I wouldn’t lie.

My little girl so young and sweet!

How can I stay here in my seat?

The rule of law will be my guide;

Within Thy Fortress I will hide.

Vengeance is not mine, I know;

It’s in Your hand where this will go.

But somehow wrongs will be made right,

If not now, then in Your sight.

If You Think It’s Hot Here…

If you think that it is hot here,

A place where you never want to go.

Here the summer has certainly parched us.

Here the crops are all failing fast.

But there’s another place where it’s much, much hotter,

And the heat wave lasts and lasts.

Here you can find you a bucket

With ice and cold water or beer.

But there’s a place where it’s so much hotter,

People beg for the drop of a tear.

You avoid it be staying inside.

But there’s a place where there’s no hiding from it:

The Hell of the lost who have died.

I have so much to write

But it was to0 long a night.

The stress of it all, all the phone calls

I slept till I saw the light.

I don’t have to write!

This is my blog, I’m not on the clock

There’s nowhere a paycheck to write.

So, it’s a beautiful day

The weather is great

I’ll crank the John Deere, put buds in my ear

And just mow all my stresses away.

About three years ago I received a rather large addition to my personal library. In addition to the over a thousand books in my office, nineteen banker’s boxes full of books was given to me by a former seminary professor.

This professor of theology, a graduate of New Orleans Baptist Seminary and a contemporary of David Platt, was from Canada. When his work permit in America expired he found himself unable to ship his library back home – the cost was prohibitive. Therefore, he offered them to me to keep and use in his absence. He said, “If I don’t come back in a couple of years, just consider them yours to keep.”

It’s now been three years, and I’m just now starting to unwrap the “gift.” I hope he forgot me.

I’ve seen how people have been writing poems by using the titles of books. Linda Kruschke is a good example (click HERE to read her latest poem, My Soul Feels Peace).

So, what I did was open up one of the boxes of books (one of which I’d already written the contents on the lid), reached down inside and pulled out a decent stack, and then arranged the stack into a pyramid…largest book on the bottom, smallest on the top.

The poem that I proceeded to write was based on the titles of the books from top to bottom.

The Science of God is the study of God

It’s something we call Theology.

The Apostolic Fathers taught it well,

Setting the standards for what would be.

The science would produce Three Views on Eastern

But Apologetic Preaching would come along

To combat what we’d come to call pluralism.

What’s True for You, but Not for Me

May give you A New Perspective on Jesus,

But be mindful of The Origin of Christology

And don’t neglect to peruse some Aquinas.

There’s something about The Passionate Intellect

That leads some to question, “Does God Exist?”

But the wise understand Creation Out of Nothing

Was breathed by the God of The Ten Commandments.

And now that the Fathers are long past gone

The Cross of Christ is the message they give.

This new generations of scientific theologians

Who preach as they ask, “How Should We Then Live?”

When the morning is young and the air is still cool,

I drop off the children at the local high school.

From there I proceed to a place down the road and

Stop for some coffee where the arches are golden.

Medium in size, no sugar, two cream in,

The brew of the bean insures I’m not dream’n

I converse for a moment as I sip my caffeination

Then resume my duty of pupil transportation.

Another morning is over and now sitting in the holder

Is a cup less filled, and Phil looks older.

And the coffee is colder.