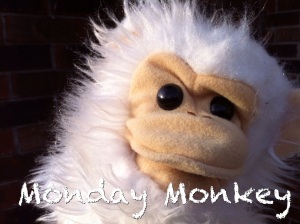 Whether or not you are a fan of Mr. Monkey and his videos, I am sure you will find this page very helpful. Instead of searching through years of posts for the one video you’d love to share, now you will have access to all (OK, most of) the Monday Monkey episodes in one place.

If you don’t remember, or if you are new to this blog, I first started filming these short videos back in 2011 in order to add comic relief and to attract new readers. Believe it or not, when I first started doing this I didn’t even have 100 subscribers.

Some people think these videos are silly and beneath the dignity of a seminary graduate, a pastor, and a virtual “pillar” of the community. Personally, I think laughter is a gift from God, so Christians (such as myself) should be able to have some fun – even with a puppet.

As an added bonus, there are a few extra video included on this page that were not in correct episode order, or were not even posted to The Recovering Legalist.

As newer episodes are created, I will add them below.

Episode #2 “There’s a Monkey at the Wheel!” (My favorite)

Episode #6 “Monkey In the Rain”

Episode #7 “Mr. Monkey’s Bad Idea” (This video contains “Third Party” music which I do not own, so don’t sue me – I’m not making any money off this stuff, you know.)

Episode #8 “Don’t Monkey Around with Gifts” (This video features my wife – and her famous scream) Also, Nugget (our precious little dog) went missing in August of 2016. We miss him terribly. 😦

Episode #11 “Monkey In a Tree House” (Filmed on location at the world’s largest tree house in Crossville, TN – now closed to the public)

Episode #13 “Staring Contest” (Never, never, ever get into a staring contest with a monkey)

Episode #15 “Mr. Monkey Meets Benny Berry” (My most popular episode, and for good reason. I get a blessing every time I watch it.)

Episode #16 “Try Me” (A music video featuring a song I wrote for my wife for Valentine’s Day – and yes, it’s copyrighted)

Episode #17 “What’s Wrong With This Picture?”

Episode #20 “The Mirror” (Mr. Monkey looks inside himself)

Episode #22 “Monkey Meets Monkeys at the Zoo!” (Yes, Mr. Monkey gets to go to a real zoo and meets real monkeys – totally cute.)

Episode #25 “Jumping On the Bed” (Believe it or not, this was my most expensive video to date – I used a real hospital emergency room Hey, since my wife was really sick, why not inject some humor?)

Bonus“Olympic Hopeful” (There should be sports for monkeys)

Bonus “Paper Not Done” (I made this when my family and I were on vacation while I was in seminary. I used part of my vacation time as study time. I LOL every time I get to the part where I say, “alone.” The monkey’s expression is hilarious!)

Episode #26 “Bug Museum” (On vacation I took my wife and girls to the bug museum owned by the pest control company I worked for when Katie was born.)

Episode #28 “What If You Cross a Monkey With Time?” (Without a doubt, my most controversial video to date. Boy! Did I get hate mail on this, or what?)

Episode #36 “Whadaya Do When Your Monkey Has the Hiccups?” (Whack him on the head with a Barbie doll, what else?) This video was the last time I was able to use my 8-track digital recorder to make a sound track. It died not too long after, and that made me very sad. I’ve not really written much music since, either.