Do you want to know what to give me for Christmas? Well, besides a Walther CCP, a flight in a WWII era bomber or fighter, dinner for two at Ruth’s Chris Steakhouse, or an upgrade to my LOGOS Bible software, let me suggest something simple and cheap…share one of my posts!

That’s right, if you want to give a simple gift to your favorite blogger, share one of his posts with others on your blog and/or social media! It cost’s nothing, and all you’d need is to wrap it in syrupilly-sweet words of praise as you ask others to check it out.

Simple and cheap! What could be better?

So, this is my challenge, and request:

This is time of year when many bloggers see lower-than-normal visits to their sites, driving many to drink, seek professional help, or yell at their dogs. Therefore, why not take just a moment and share some posts you’ve liked with your friends? Doing so will help maintain a poor, lonely blogger’s stats during the cold and dreary months of the year.

And remember, what goes around comes around.

Also, the next time you read a decent, well-written blog post, don’t forget to “like” it. Even better, why not leave a comment? Sometimes a nice comment could mean the difference between a bad day and a great day. You just never know how far-reaching and life-altering an encouraging word can be. And that’s no joke.

Now, if you do have access to a P-51 Mustang or want to treat me to an expensive steak dinner, then who am I to refuse? But if you can’t, a simple “like” and share will make my day!

This episode of Monday Monkey features my beautiful wife, Valerie. Also, by her side is our little “boy,” Nugget.

I hope you enjoy it, and if you do, then please pass it along, recommend it, forward it…whatever!

Just do this first – warn those who startle easily. Otherwise, you might ought to have an ambulance standing by.

“Don’t Monkey Around with Gifts!”

1Peter 4:10 – As every man hath received the gift, [even so] minister the same one to another, as good stewards of the manifold grace of God.

So, Thanksgiving is behind us. All the cooking and Pilgrim costumes are a thing of the past. Of course, there are still plenty of leftovers to have for breakfast, lunch, dinner, late visitors, desert, bedtime snacks, brunch, and dog treats.

Now, all we have to do is look forward to the holiday renowned for peace (clearing throat in a sarcastic way).

For the first time ever, I actually went shopping in the early-morning hours of Black Friday. I could not convince my wife to stay in bed until the crowds were finished assaulting each other after waiting hours in the cold for the stores to open. No, we had to get up and stand in line for something they had only 50 of, even though we were 150th in line.

Eventually, after whining enough, my wife agrees to drag us to the mall. There, the stores had already been open since 4am, so the stampedes were essentially over. Everyone had a pleasant, cheerful attitude. The rest were already being booked at the county jail.

I have an idea for next year. We need to go stand in line where the first 50 customers get a new iPad3 for $25 and do some witnessing. I bet if we do our best Ray Comfort/Kirk Cameron impressions for a few hours, we’d either have a whole new congregation of believers, or we would be martyred for our faith. If not that, we would be sure to move up in line. 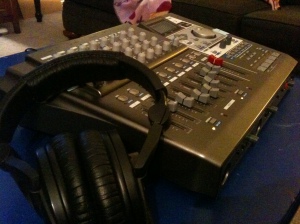 I heard on the news that yesterday actually set some records. How ironic is that? I made a record (well, I recorded something).

Yesterday, my daughter and I recorded a radio program to be broadcast this Sunday. It was unusual to have my daughter, Katie, on the program, since it is usually a time for me to preach. Nevertheless, it was pretty cool to interview her and talk about what God had showed her in His word.

While we were in the recording mood, Katie wanted to record a song. Actually, it was a medley – “This is My Father’s World / What a Wonderful World.” I am including it in today’s post. Hope you enjoy it.

This Is My Father’s World Medley