Hey everybody! You’ve got to check this out!

Down in a town call Ringgold, Georgia, is a little wedding chapel…the very one where Dolly Parton and a few other famous people were married over the years.

Since last year, I have been helping out at the Ringgold Wedding Chapel by performing weddings, mainly on Saturdays and some Sunday afternoons. When the owner of the wedding chapel decided to do a promotional video, she asked if I’d be willing to be interviewed.

Of course, I was willing. Duh.

So, click on the video below and let me know what you think. And, if you’re in the area and want to get hitched, well… 😉

Husbands, love your wives, even also as Christ loved the church and gave himself for her (Ephesians 5:25).

In other words, think twice before you say of your marriage:

“This is too tough.”

“I deserve to be happy.”

“She doesn’t meet my needs.”

“She cheated on me.”

Think of all Jesus could have said, but didn’t…as He carried the cross all the way.

“As Christ loved” is our example. If He didn’t quit, when should we?

It was a beautiful day in 1994 when my beautiful bride agreed to subject herself to a life with me. Had she known what she was getting into, she might have backed out. Of course, she would be the first to disagree with that assessment.

We were young, even though we were in our mid-twenties. It’s hard to say, however, if we had any idea how things would be once we reached our 40’s. I must say, though, that it’s funny to think back at how we thought we were starting marriage a little late. We were so young, full of energy, potential, and hope.

My wife just said, “I really thought we were old.”

The Odds Were Stacked

Most people are aware of the odds against people staying married for any real length of time. But what most people are not aware of are how dramatically the odds turn against long-term marriages when just a few factors are thrown in.

A marriage made up of two people from perfect backgrounds, with no emotional baggage, will inevitably have its struggles. But when you take two people who bring into a marriage enough emotional and spiritual baggage to fill a cattle car, well, the odds of staying married are not great. Thankfully, we serve a God who doesn’t care about the odds (Prov. 16:33).

I can’t tell you how many marriage proposals I have seen on YouTube! Some were so elaborate…I mean, how’s a guy to compete with a million-dollar musical?!!

Let me tell you how I did it – I took her to the altar. No, I’m not talking about going to the altar to get married; I asked her to marry me at the altar. 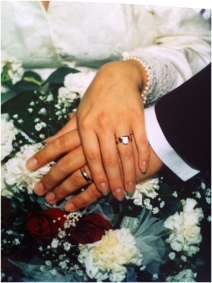 You see, the first time I quasi-proposed (I never really asked her to marry me) was when we both picked out her first ring – yes, her first ring. Then, later that evening, like an idiot, I took it back because “I wasn’t sure about things.”

The second time was a little different. After being told not to come back unless I brought a bigger ring, I bought a full-carat solitaire and went to church.

During a communion service, one in which it was our custom to go to the altar and pray before we partook of the elements, I asked Valerie to go with me. Once we knelt, with both of us holding hands, I officially proposed in front of God and everybody. I wanted our marriage to be something built on a holy foundation, so after she said “yes,” our first meal together was the Lord’s Supper.

When I say we are “still at it,” you can take that any way you like. The fact is that we still struggle, still have arguments, and still act like people who never learn. But on the other hand, we still pray, still play, still love, and still worship together, and we’re still married.

There’s nothing wrong with people who never struggle, somehow always on perpetual honeymoon. However, any marriage worth working for, worth fighting for, will leave a few scratches on your wedding band.

My advise to others? Just keep at it.

Happy anniversary, Valerie! I love you!

Not long ago I wrote about how I hated weddings. Well, I might need to update that a little. If all weddings could be like the one I just officiated, I might be a little more excited.

Yesterday (11-10-12) I had the honor to unite Alicia, my step-daughter, and Josh Westbrook in marriage. It was a fun, sweet, and beautiful ceremony which brought both laughter and tears. At one point, unlike most any other time, I was almost sad it was over (and then I remembered how much cleanup had to be done).

One moment that I will always remember was my opening statement…”Wuv, Twue Wuv…” Yes, I actually said it.

Even though a professional photographer was taking pictures, I got Katie to take a picture of just Alicia and me. I wanted to be able to remember standing next to such a beautiful bride.

Of course, all dads think their daughters are beautiful, right? This is no exception. However, I can truly say she got her looks from her mother, not me. If you see any resemblance between us, then it is only coincidental, because remember, she’s my step-daughter.

But even though Alicia may not have gotten any of her physical characteristics from me, there were some other characteristics she did inherit, and they were made known through her vows to Josh.

Instead of doing it the old-fashioned, traditional way, Alicia and Josh wrote their own vows (which made it easier on me). Josh actually said his by memory (or made them up as he went along, I don’t know), but Alicia had to read hers. She gave them to me to hold until her turn.

After Josh recited his vows, Alicia looked at me, which was my cue to give her the vows she had printed on piece of paper. Then, as she read those words, halted slightly by her tears, her relation to me became evident. The family resemblance was obvious. See if you can pick up on it.

I, Alicia, take you Josh, my best friend, to be my husband.

I give you this ring, my heart, and every part of me.

With it I vow to always: love, honor, respect, and cherish you forever.

I promise to always be open and honest, be there in good times and bad, and to be forever faithful.

I promise to always live first for our God and then for you as your helpmate as it is commanded in His Word.

I promise to always be your partner, your best friend, and your number one fan.

I promise to always listen to the words you speak, and listen even harder for the ones that you don’t.

I promise to embrace whatever changes life throws at us as it will only make us grow closer together.

I promise to always laugh with you, give you back scratches every night and to always give you those “madly in love kisses” no matter how old we are.

I promise all of this to you in front of God and these witnesses until death do us part because we WILL NOT FAIL!

A lot of promises are made at weddings. Many times those promises are broken, leaving hearts and lives in ruin. But marriages in which the couple puts God first, then loves each other with the sacrificial love He modeled in Christ, are far more likely to see those promises kept.

I am very proud of you, Alicia.