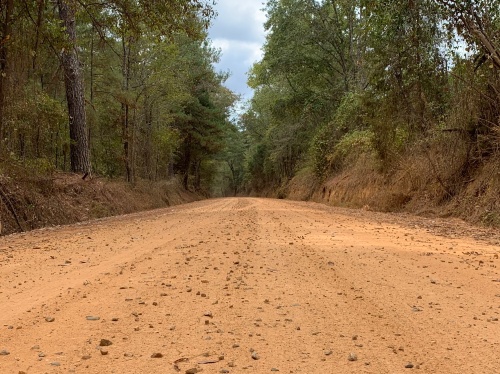 A portion of the unpaved southern half of the road where I live.

I’m sure you’ve either heard of it, or maybe you’ve even gotten your clothes stained by it, but Georgia is famous for “Georgia Red Clay.”

The reddish soil that covers much of the state of Georgia, along with areas in surrounding states, gets it’s color from iron oxide, the reddish-orange shades varying as much as any shade of red rust. It’s almost everywhere.

As a matter of fact, a good portion of the secondary roads in my area look just like the one above.

On the other hand, especially around these parts (Washington County), there is another kind of clay: Kaolin. 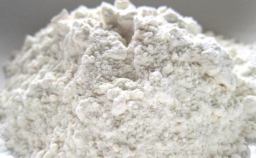 As opposed to the common red clay, Kaolin (nicknamed “white gold” because of its color and its profitability) is mined, processed, and sold locally and around the world in various forms for use in products ranging from paper to lipstick. Actually, over 50% of it is used to give coated paper the “gloss” you might see in quality printer paper or magazines.

FYI, just click on the attached link and learn about one of the world’s largest producers of Kaolin located just 10 miles south of me in Sandersville, GA: Thiele Kaolin Company.

However, what I wanted to write about was not the types of clay that can be found in middle Georgia, but those red clay dirt roads…just like the one two houses down from me…right where the pavement ends.

It’s About the Dust

Two days ago, as I drove by one of these dirt roads, I sensed there was something profound…an important lesson…that I needed to learn then share. However, asking myself “What’s so spiritual about dirt roads?” over and over didn’t bring me any closer to a revelation. Then, as I was in the shower this morning, the truth of it all became clear (or clean, whichever):

It’s about the dust!

Think about it. You could drive a thousand miles down a nice, paved highway, and nobody would be any more the wiser of your long, hard journey. But travel down a dirt road and people will know you’ve been somewhere.

In a small, rural town like mine, the people have the tendency to care a little more about their neighbor. It’s not a firm and fast rule, but generally speaking, here you’re more likely to have someone lend you a helping hand than in the middle of a metropolis.

So often, in our “big cities,” we live such guarded, relationally-sanitized lives that we could be driven to near exhaustion and no one would be able to tell from the outside. In other words, our cars are clean.

But get down to a place where “everybody knows your business” and what do you find? A more openness about the road of life, a transparency that admits the road is dusty and dirty and has an affect on you.

Are bigger towns with the paved roads really all that better? Consider what the Dictionary of Biblical Imagery had to say about “streets” under the heading of  “A Window into the City’s Common Life”:

[The] street as a setting in the Bible represents what is commonly true of the mood, spirit and well-being of the city. Streets typically line the entirety of a city and serve as its reference points. Descriptions of what takes place “in the streets” therefore function as generalizations about what is going on in the city as a whole. – Leland Ryken et al., Dictionary of Biblical Imagery (Downers Grove, IL: InterVarsity Press, 2000), 820.

If the streets of this middle-Georgia pastorate are any inclination, there’s a lot of opportunity to be like Jesus…to be a servant. At least down in these parts people are a little more willing to admit the need to have their feet … or their tires … washed.

So after he had washed their feet, and had taken his garments, and was set down again, he said unto them, Know ye what I have done to you? Ye call me Master and Lord: and ye say well; for [so] I am. If I then, [your] Lord and Master, have washed your feet; ye also ought to wash one another’s feet. For I have given you an example, that ye should do as I have done to you. Verily, verily, I say unto you, The servant is not greater than his lord; neither he that is sent greater than he that sent him. – John 13:12-16 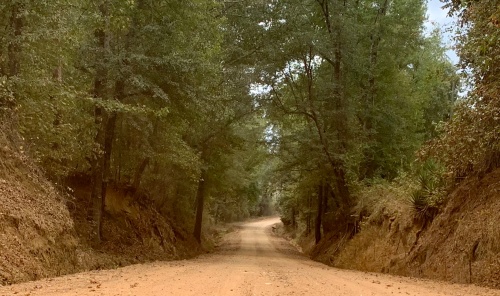 CeCe is a server at a Steak n’ Shake in Indianapolis. CeCe is evidently an excellent server, too. Either that, or someone was just tremendously generous. 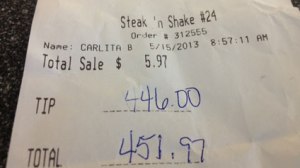 Why did CeCe receive such a large gratuity? It seems that CeCe was having a hard time a table, yet she was able to keep her composure and maintain a sweet smile. An older lady who frequents the Steak n’ Shake saw what was going on, then proceeded to leave her a tip which was probably more than CeCe makes in a week.

In reality, large tips like the one CeCe got are extremely rare. As a matter of fact, few people regularly tip more than 20%. However, I have come up with 10 ways for servers to “bait” their customers into leaving much larger tips than usual. If they work, just send me a small percentage of the take and we’ll call it even.

Servers at restaurants work harder than most anyone else in the world. The tips they make are usually not that much in comparison to the work they do, and tips are usually all they make.

As Christians, we should always, always tip a server at a restaurant regardless of service they render. As a matter of fact, one of the best times to leave a large tip is when you receive the worst service. You don’t know what the lady serving you has gone through that day. You don’t know how she has been treated, or what news she has just learned.

Be an example, not a hindrance.

One of saddest things I’ve come to learn is that Sundays are the worst days for tips. Believe it or not, I have talked to many servers who have turned away from God all because of the way they are treated on Sundays by “Christians” after church.