Breaking the Habit/Addiction (No mo nomophobia)

Last week I opened up and shared my iPhone usage stats for the week. I don’t know how they compare to other people (except one of our deacons), but they were, by estimation, a little high.

I said that I was going to try to cut back my usage my being a little more aware of what I was doing. 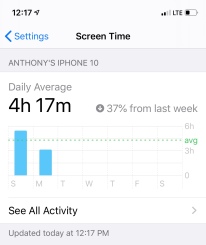 Last week was 7h 35m! Not a huge decrease, but a decrease, nonetheless.

Yes, I watch a lot of YouTube videos. But I also have YouTube music. And, I don’t watch much television. This is pretty much it for me.

In comparison, last week’s average was 74, with the most pickups in one day being 107! I spent less time looking at Facebook this week.

How did you do?

An Addiction Or Tool? Would Cigarettes Be Safer?

I didn’t think of the cigarette part until I started writing the title, but it’s an honest question worth exploring.

Is there one addiction more dangerous than another? Of course. Honestly, cigarettes would kill me sooner than cancer from my phone.

The point that I want to make this morning is that I think I might be addicted to my cell phone. And if I am, then admitting it to the world is a good way to overcome it.

Hello, my name is Anthony. I’m an iPhonaholic. I think.

OK, so let’s look at what the professionals have to say. When I did a quick google search of “what do you call someone addicted to looking at their phone?”, I discovered that much of the research and writing that popped up was several years old. Even the most recent professional articles referenced research that was done as far back as 2008.

The official term, nomophobia, was derived from combining “no mo-bile” with phobia (irrational fear). Simply defined, nomophobia is “an extreme fear of not having your phone or not being able to use it.”

Since this is not an official research paper, and I don’t really want to get into the work of sourcing everything I read, just google what I did and you can find it all. But when it comes to the numbers, they are pretty disturbing.

If you are reading this and wondering, “Do I have nomophobia?”, then social psychologists at Iowa State University have put together a 20-item questionnaire meant to help you self-diagnose. Now, this, too, was from several years ago, so I don’t know if anything has changed. But if you’re like me, we’ve got problems.

But on the other hand, back in 2015 Brian Fung, a reporter with the Washington Post, questioned the legitimacy of equating nomophobia with ” real, clinical addictions.” Fung argues that true addictions and disabling phobias generally affect only 10 to 12 percent of the population, so, cellphone “addiction” might not be as bad as described.

And let’s think about this… Before there were cell phones, how did we stay in contact? We had pay phones, didn’t we? And before we had Waze or Google Maps, how did we find our directions to destinations? We either used maps or wrote down directions. Yet, where are the pay phones these days? Have you tried to buy a map, lately?

Before there were cell phones, business was conducted over land lines, desktop computers, in stores, and on paper. Nowadays, as you know, business, shopping, and even legal documents have  been adapted to mobile devices. And what’s more, a lot of our daily activities now require we have a cell phone, or the immediacy of the transaction demands it.

As one researcher rightfully noted, the increased usage of cell phones may not be the result of increasing addiction as much as it is the increased demand put on individuals by the culture and evolving economy.

But We Can Do Better

So, back to the original assertion that I have an addiction… Do I? Probably not, at least not in a clinical sense.

Am I going to give up my iPhone? No. Do I go to bed with it and wake up with it? Yes, because it has replaced my clock and my alarm and the “white noise” app helps me sleep.

But do I look at it too much? Are my daily “pick ups” excessive? Am I comforted by feeling of the phone in my left hand? Do I reach for my phone at the first sense of boredom? Do I panic if I leave home without it? Do I take it with me to the shower? Is it the first thing I look at when I open my eyes in the morning and the last thing I look at before i go to sleep?

Below are MY stats from this morning and last week. Are you willing to share yours? 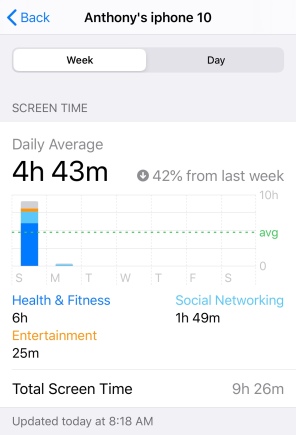 This Monday morning, with Sunday’s stat’s setting the average.

Last week’s average per day, along with a breakdown of what I viewed.

The average number of pickups per day – 74.

Let’s come back to this next Monday and see what changes can be made. I will not quit using my phone, but I am going to try to lower the screen time stats and change what is most commonly viewed.