“Why are you so late?” was the question out of the first child’s mouth. That’s not true; I just felt her think that as she stepped onto the bus.

Yes, I was about ten minutes late picking up the kids this morning. Some nearly died from the additional exposure to the 49-degree weather (I know this because they got on the bus saying that they were about to die waiting on me in the cold). However, it didn’t help them too much to get on the bus, for since I was running late I didn’t have time to warm it up – or put up the windows that were put down by the elementary kids the day before.

Anyway, why was I late? I overslept…simple as that. But telling that to the first child I picked up proved to be rather boring and nothing to write about. Therefore, since my adrenaline was already pumping and my mind was functioning at regular speed (unusual for 6:40 in the morning), I decided to make the reason for my tardiness (I hate that word) more memorable.

“You are NOT going to believe what happened to me this morning!” I exclaimed to the next kids that got on my bus. “I am running late because of a herd of chihuahuas.”

You see, what happened was the craziest thing I’ve ever seen! This morning I walked out of the house and started across the parking lot to my bus, but then all of a sudden I heard the humming sound. I first I didn’t know what to make of it, and then it got louder…then I heard growling…then a chorus of tiny, yappy barks.

My rendition of this morning’s horror.

Totally taken aback, I look forward and peer into the early morning shadows to see the ground moving around my school bus! As I fearfully inched closer, it became clear that a dadgum herd of chihuahuas was surrounding my school bus! What the taco was going on???

At least a hundred pocket-sized terrors began barking at me, growling, snarling. When I took a few more steps toward the bus, knowing I had children to go pick up, the biting burritos from some south-of-the-border Hades started biting at my shoes – which are the expensive gray kind old men like me buy from New Balance – and that ticked me off!

At first I tried shooing them away, but they couldn’t understand me. Besides that, there was something about the bus they liked, and they wouldn’t leave for love nor pesos. That’s when I walked back to my house, went into the garage, and retrieved my personal putter normally reserved for Gooney Golf games in which I mercilessly defeat every opponent during youth outings with our church.

Knowing there were freezing  children out there waiting on the side of the road…freezing children, fearful that their bus driver had abandoned them…I had to act with speed and ferocity. With a whack here and there, followed by the Hispanic-like squeals from demonic chihuahuas,  I was finally able to clear the way to my bus.

Fifteen minutes later, in a cold bus, I was doing what God has called me to do – save the lives of freezing children and transport them to a place where they can be educated.

Now, you can decide for yourself it the above story is a good one and believable. Unfortunately, many people are more willing to believe an exciting story than the boring truth. And beyond that, the more one tells a lie the more likely the listener (or reader) will believe it, especially if the lie is told with passion.

With that being said, Hillary Clinton is being questioned by a congressional committee. I want to hear what she has to say about the chihuahuas in Benghazi.

As I get ready to head off to the land of slumber, let me leave you with a precious poem which will encourage, strengthen, and uplift your spirits. It’s like one of those you see on Facebook every day.

Roses are red and violets are blue.

I’ve always known that, and so have you.

Puppies are sweet and faithful and fun;

The world would be sad if we had none.

So share this sweet poem with all your friends.

If you love God, your mother, your children, puppies, kittens, or the Baby Jesus in a manger, you will now forward this poem and post it on your wall. If you don’t, millions of demonic monkeys will arise from the abyss, come into your kitchen, and then dirty every stinking dish in your house! 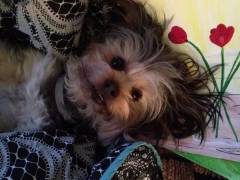 For the love of all that is holy and pure; for the love of children; for health and decency; “like” and share this poem – a precious poem which made you feel warm and fuzzy – or you just might find yourself in everlasting torment wishing you had at least one more Facebook friend to message.