Tag Archives: Never judge a book by its cover

We have a little dog in our family named Nugget. We call him “Nug.” He was a gift to my wife when she got her accounting degree from UTC. 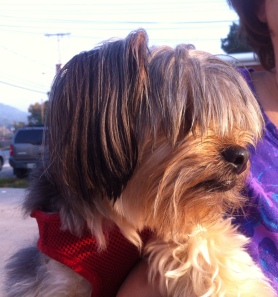 Nug is a Chorkie (Chihuahua-Yorkie). He is cute as all get out, but his hair can get long. That is why we have to get him groomed every so often. If not, his hair will cover his eyes, which causes him to not be able to catch treats.

Just the other day, poor Nug was having all his treats snatched away because they would land in the floor. He couldn’t see me toss them, but our daughter’s dog, Baby Girl, could. That is when I’d had enough. He had to go to the groomers.

There is a cute little place in the North Shore district of Chattanooga called Bone Appetit. Believe it or not, they are a full-service dog-lover’s heaven. Not only do they sell toys, leashes, and food, but they sell all sorts of gourmet treats made in their own bakery.

Bone Appetit is also home to Groomingdale’s. This is where Nug went to make his fur look fine. The people there were so nice, and the facilities smelled…well…not like a kennel. Having a doggy treat bakery on-site must have had something to do with it, I guess?

And speaking of that bakery, I wondered what would happen if I stuck some of those treats in my daughters’ Christmas stockings? Would they figure out the cookies were meant for animals, not them? I wonder how they taste? Hmmm.

These are all for dogs!

So anyway, later in the day I went to get Nug. He was so happy to see me that he nearly jumped out of the groomer’s arms. Now that the hair was out of his eyes, he could see me! And he can catch treats, too!

Now, I said all of the above in order to make a point. Did the way Nugget looked before, or after, change his relationship to my wife and me? The way he looked had nothing to do with his place in our hearts, only whether or not he could be “blessed” with treats.

The way we look has very little to do with our relationship to God, either. Just because one person may not look his best, that doesn’t necessarily mean he isn’t a child of God. As a matter of fact, there was a really fancy poodle at the groomers, but (thank the Lord) it didn’t belong to me.

Be careful when you judge by appearances. Sure, some people dress in ways that are meant to make a statement. Some don’t dress at all in order to make a statement. But, generally speaking, looks are a poor indicator of “ownership.” Nugget is no more ours now than when his hair was long. God is no more my Master because I am bald.

“Judge not according to the appearance, but judge righteous judgment.” – John 7:24 KJV

Just something for you to think about.

The Other Side of a Coined Phrase

You can talk all you want about what we’re NOT supposed to do, but we DO it all the time.  Who hasn’t seen the video of the panel of judges that were totally awestruck, not to mentioned very embarrassed, when Susan Boyle began to sing?  Judging by her looks, this was not supposed to be a superstar singer.  The whole crowd was guilty of  thinking the same thing…”What is this ugly woman doing on stage?”  Subconsciously they were thinking, “Only beautiful people can sing beautifully.”  Oh, how wrong they were!

I have heard it said all my life, “Don’t judge a book by its cover.”  Since I have done some research, that would mean I would have to be younger than 70, because that phrase wasn’t even coined until the mid 1940’s.  Anyway, I have been taught, as most people have, that we are not supposed to make assumptions about people simply on the basis of appearances.  As a matter of fact, long before “don’t judge a book by its cover” was coined, Benjamin Franklin said, “Don’t judge men’s wealth or godliness by their Sunday appearance.”  We all know that we shouldn’t judge a man’s character by his appearance (or even by the color of his skin, as Martin L. King, Jr. would have said).  But with all that said,

I can’t help but think that there is another side to this coin (coined phrase, that is).

While it may be true that we shouldn’t come to a conclusion about someone based solely on appearance,  how many books would you pick up and open if on the outside there was nothing describing the inside?  How much money is spent these days on cover design, I wonder.  Go to any bookseller and browse any isle and tell me what you find.  Are any of the books simply bound with only the title and the author printed on front?  Probably not.  Every kind of trick imaginable is employed to catch your eye and cause you to open the cover to see what is inside.  Now, not every cover will appeal to every reader, but the author will know ahead of time what type of audience he is trying to reach, therefore he will have a cover designed to appeal to the reader that will most likely buy the book.  How foolish would the writer be if he spent thousands of dollars for a design that appealed to the wrong crowd?  Even more, what would be the purpose of writing a book that had a cover which said nothing hinting of the content?

The other side to this “book-judging” coin is that even though we should not pre-judge a book by what is on the cover, the cover should give us some clues to what is on the inside.

For example, take a look at the title of the book

to the right.  If you were to pick this book up at a book store, you would assume that on the inside there should be at least a hundred recipes, correct?  Really, the title of the book should give you confidence that inside resides the answer to all those questions you’ve had recently about how long you should roast a kangaroo tenderloin.  Shouldn’t it?  It says “How to Cook Everything.”   Well, by dang, I would assume, based on the cover, there should be, by my judgement, a kangaroo recipe in there somewhere.  I don’t know if there is or not, but do you see my point?  If you say you’re something, or if you want to give a certain impression, then be what you say you are, or kangaroo eaters are going to be disappointed.

Now, Jesus did say in Matthew 7:1,  “Judge not, that ye be not judged.”  He also said,  “Judge not according to the appearance, but judge righteous judgment” (John 7:24).  The problem is that when we say that we should not judge a book by its cover, we imply that we can NEVER make ANY judgment based on what we see.  Seriously, how practical is that?  Jesus never said that we could never make righteous judgments.  As a matter of fact, consider these words of Jesus as found in Matthew 7, verses 15-20:

We are not supposed to come to any rash, prejudiced conclusions about people.  That is a fact.  We have no way of knowing whether a nice, fluffy sheep is a wolf, or not.  By outward appearances alone, all we can determine is that if it looks like a sheep and sounds like a sheep, it must be a sheep….until it starts to act like a sheep-eating wolf.  Then, when a sheep starts baring fangs at us, it is safe to judge, and there is no sin to be added to our account.

Righteous judgment, as Jesus mentioned in John 7:24, CAN be made if it is in reference to the fruit being inspected.  The fruit of a wolf is different than a sheep.  But here’s the point:

If a sheep claims to be a sheep, it should act like a sheep, not a wolf!

What is on the cover of a book SHOULD tell what is on the inside.  What we look like on the cover SHOULD make others want to read what is inside.  What we look like on the outside SHOULD mirror the message of the Author’s Word.  As believers in Christ, we claim to be something special.  We have the imprint of our Saviour written on our binding.  Jesus has a reputation as an Author, and what is inside our covers should not bring shame to His writing ability.  It may be wrong to judge a book by its cover, but it is equally wrong to claim to be a book that you’re not.