I, for one, regardless of Hollywood, support Georgia’s Governor, the new fetal heartbeat law, and the rights of the unborn.

The arguments from those boycotting Georgia are that this is an “attack on women,” or an attempt to “hold women hostage.” However, these and other similar protests do nothing but avoid and mislabel reality.

You see, it’s not about women’s rights; it’s about human rights, particularly the right to life – and more specifically, the right to not be torn apart limb from limb in your mother’s womb, or left to die on a stainless steel table while your “doctor” finishes a sandwich and paperwork.

Those who oppose this law and want to see it overturned must one day answer to their Creator for what they actually support: Infanticide, murder, and the torture of innocents.

Boycott Georgia? Not me! I fear a holy God more than Alysa Milano.

For the record, I have never watched a single episode of The Bachelor. I couldn’t care less. But when went to pay for my groceries, I walked by the magazines and saw this. Unbelievable, in a sad, pathetic way. 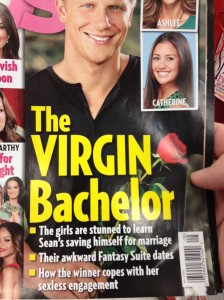 I don’t want to say too much. All I want to do is ask some questions. You don’t even have to answer them; I just have to get them off my chest.

“Let marriage be held in honor among all, and let the marriage bed be undefiled, for God will judge the sexually immoral and adulterous.” – Hebrews 13:4 ESV

“But because of the temptation to sexual immorality, each man should have his own wife and each woman her own husband.” – 1 Corinthians 7:2 ESV

“Who can find a virtuous woman? for her price is far above rubies.” – Proverbs 31:10 KJV

I wonder how a real dad with a real shotgun would influence Mr. Bachelor’s decision making process? I don’t guess that matter much, though, since it seems Sean Lowe picked his bride to be.

Hope it works out, bubba. Reality is tough on a marriage made in fantasy land.