Saying “Bye-Bye” to “The Ride”

Several years ago I had the opportunity to regain my masculinity. No, I did not undergo an operation or get an injection of any kind. No, I didn’t go out into the woods and kill Bambi just to prove I knew how to fire a rifle or shoot an arrow. I regained my manhood by getting something else to drive besides a minivan…

I got a black Cadillac.

I was so proud of The Ride, as I so fondly named it. It was an old ’92 Sedan DeVille that had been sitting for a year or two and needed some work. All the owner wanted for it was $1,000, so I bought it. With a little cleaning, a little buffing, and a few new parts, I was getting looks from the bruthas and burning a little front-wheel-drive rubber.

Oh, it was the perfect “preacher car.”

Riding Into the Sunset

Unfortunately, old Cadillacs aren’t the most reliable forms of transportation. After a while, things start breaking down faster than one can fix them – and NOTHING is an inexpensive fix.

On top of the fixes that cost so much, The Ride only got around 12 mpg. That would have been bad enough, but the gas-guzzling V-8 also required premium gasoline. It was just too expensive and unreliable to be a daily driver.

So, today was the day I had to say “goodbye.” Believe me, it was difficult to see the old piece of junk go. It was MY car, not my wife’s. It was a car with an American V-8, not a hyper Japanese four-banger. It was big, unsafe, and FUN!

Getting pulled by a winch onto a truck.

Loaded and ready to leave. 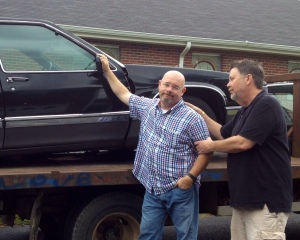 Saying “goodbye” is hard to do.

Back to a shared minivan. Oh well.

Note: If any of you have a car that a preacher can drive without looking like a wimp, while at the same time not having to take a loan out to drive across town, let me know.

Recently, like this morning, I was giving some thought to using images from the web on my blog. Some pictures that I have used are 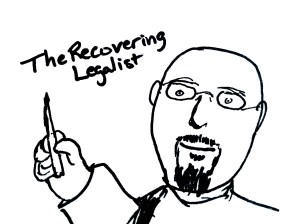 in the public domain. Others are ones that I have taken with my own camera. However, most are others which I have pulled from Google Images and linked back to the original poster/photographer…most of the time.

Well, in an effort to better comply with the Fair Use Act, not to mention avoid copyright infringement, I am going to ween myself of such abuse, intentional or not, by DRAWING my images…..at least for this post.

The Start of the Story

There must be a virus going around. It either started with an episode of “NCIS” that showed two of the lead characters, Ziva David and Tony DiNozzo, sifting through the puke of drunks; or it started after everybody in the city ate at the same Chinese resturant. I really have no idea. All I know is that there is something causing people everywhere to start throwing up.

Just yesterday, my wife called me on her cell, her voice high-pitched and quivering, “Anthony (it’s never good when she calls me by name), Haley just threw up…in the car…and it is bad! What should I do?” I responded with a suggestion sure to go down in the annals of history as one of the most logical and reasonable statements known to man….”Clean it up!”

Does anyone want an old Cadillac? How do you clean a mess like that? Fortunately, for some reason, like as if she was transporting a toddler with a potty-training problem, Valerie thought to bring a change of clothes (for Haley) and some cleaning wipes.  Unfortunately for the Cadillac, it now smells like puke AND diaper wipes. Honestly, you could probably get it cheap.

I put my bus in gear (I had stopped to talk on the cell phone), drove to the elementary school, then picked up my 25+/- kids. Wouldn’t you know it, as soon as they got on one yelled, “Eeewww! Somebody puked!”

One of the problems with children regurgitating on a school bus is that you have multiple other children with weak stomaches. Need I say more?

So, now I have a Cadillac and a bus flowing with virus-laden, acid-laced chicken soup.  It happened again on the bus this morning. I blame it Obama. Why? Why not? It’s either that, or it’s payback for my wife having to clean the car and the daughter on the side of the road.

Yep, I’ll just blame Obama. My payback for his blaming President Bush for everything.