In My Father’s Honor

Today is a strange day. I am alive.

Now, being alive shouldn’t be that big of a deal for most people, but it is to me, especially on THIS day. Today is the anniversary of my father’s death.

Anniversaries of deaths are not uncommon, either. But what makes today unique is that I am the same age that my dad was when he died. He was 46 – I am 46!

Those who knew my dad before he became a Christian would testify to the fact that he was no wimp. He knew how to fight, fish, and fire a weapon. Between him and my uncle Don (his brother), there weren’t too many men willing to go toe-to-toe with them.

Yet, once he accepted Christ, he became the perfect example of gentleness, kindness, grace, and compassion. I know of no one any more humble than he was. (Oh, and when his brother finally became a believer in Jesus, the same transformation took place)

My dad was a preacher. He might not have been the most eloquent, but he loved the Word and loved telling people about Jesus. Had he been alive today, he would have wept at the state of our nation and where we are going. Above all, he would still be preaching, even harder. 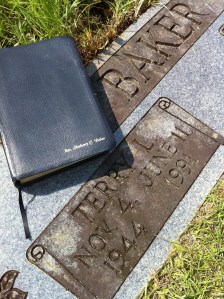 I don’t care if you’re Baptist, Presbyterian, Pentecostal, Nazarene, Methodist, or whatever…MAN UP!! Stand in the gap! Quit being a politically motivated, crowd-pleasing, purse string-tying wimp and PREACH THE WORD!

Check out what’s going on in the world and what’s coming to America. Do you think things are all going to turn out like a big Hillsong praise service if you keep preaching like Joel Osteen?! Folks, what we need now more than ever are some Elijahs, some John the Baptists, some old-school Billy Grahams, some D. L. Moodys, etc. We need more men of God who know the difference between the Word of God and a motivational speech!

Don’t try to be popular. Don’t try to be “cool” and “hip” with the younger generations. Quit fighting over the styles of worship if your congregation doesn’t even know HOW to worship! Forget trying to become more “seeker-friendly,” and just SEEK THE LOST! The world is going to Hell and we are greasing the skids.

Be real. Be humble. Be yourself. Love your enemies. But for the love of God, pastors and preachers, “Watch ye, stand fast in the faith, quit you like men, be strong” (1 Corinthians 16:13). In other words, take off the liberal mom jeans and put on some prophet-worthy overalls and get to work.

I wish all of you could have met my dad, Terry L. Baker. Like my wife noted when she heard a recording, he was about “as country as they come.” Fortunately for all of us, I still have a few recordings of his preaching.

Below is an edited version of a message my dad preached back in 1981. At that time he was doing a radio program on WMOC for a local children’s ministry.

Fittingly, the sermon from my dad, based on Deuteronomy 6:4-7, concerns how to raise a godly family. Tell me if you think he sounds a little like me 😉

All honor and glory be to my Father in Heaven, the One who graciously gifted me with an earthly father who loved Jesus and taught me how to do the same.

One response to “In My Father’s Honor”