Not Just a Magnificent Double Rainbow 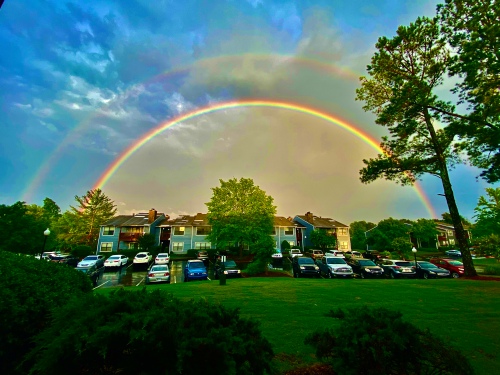 How many things are more impressive than a huge end-to-end double rainbow after a major downpour?

Can’t think of many.

But how many even know what a rainbow is? It’s not simply a beautiful phenomenon or the symbol of a social advocacy movement.

What if it’s a double rainbow? My guess is God needed a little extra reminding today.

It All Started With, “Let’s Go Get Breakfast!”

I have been accused of giving too many details and making my stories too long, so I will spare you many of the details and try to make this story short.  Nevertheless, just remember, leave out just one little detail, and instead of a cake, you get a brick.

It all started a couple of weeks ago when my wife woke me up with a smile and said, “Let’s go get breakfast!”  It sounded like a good idea, as many good ideas do, but it was a Saturday morning, and there was little on our schedule (for a change), so I should’ve known something was about to go wrong.

The only thing we needed to do before heading out to a place that sold pancakes was to go into a room in the basement of our church building – to a small room where we were storing some boxes of personal items during our move to the parsonage –  and retrieve one small file for my daughter. When we saw that the file was wet, we knew something was terribly wrong.

Just as soon as we started moving a few boxes around, we found out that the whole floor was soaking wet, and every box that was anywhere close to the floor was wet, too.  And not only was everything wet, but there was mold all over the boxes. Why did my wife get my hopes up? I was really looking forward to those pancakes.

Needless to say, the rest of that Saturday morning consisted of unpacking a room full of boxes, including separating all the items, and making sure nothing was ruined.  Unfortunately and tragically, there were some casualties. Pictures.

How it was that boxes full of of priceless and irreplaceable photographs ended up in the boxes closest to the wet floor, I will never know.  What I do know is that that afternoon we were forced to take a melancholy trip down memory lane.

At one point my wife wept like someone had died. One of the photographs that was nearly completely ruined was a one-of-a-kind of her mother and father. It was impossible for me to reassure her that everything would be OK, because I couldn’t; that was the only photograph of its kind.

They were also other items that were either ruined or nearly destroyed. Some of those were keepsakes that were created by our children when they were very young, and one item was a construction-paper-version of Noah’s Ark that our nephew made.  But even though there were some tragic losses, most of the photographs were only wet and a little moldy around the edges. So, what we had to do at that point was rescue what we could  before they dried and stuck together.

My wife and daughters and I began taking photographs out, one by one, laying them out to dry.  The only  place we had to do that was in another Sunday school room across the hallway.  What started out as a family outing in search of breakfast, ended up being a family project: create the largest display of damp photographs in our family’s history. 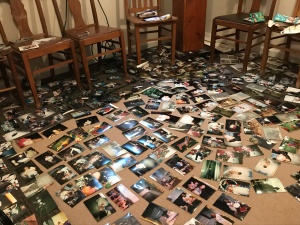 Now, on a sidenote, I took some photos of all the photos, just like my daughter Katie did. But, as always, Katie cannot just take a picture, she has to create photographic art.

So, again, what started out as a quest for breakfast ended up being something else: a time to make memories out of memories.

“Boast not thyself of tomorrow, for thou knowest not what a day may bring forth.”

Sometimes breakfast will have to wait.