In Their Own Words… The Founding Fathers and Our Christian Heritage

Every year around this time the godless, anti-Christian, anti-religious, “spaghetti monster” fans wear out the keyboards of their iMacs as they hammer any and every posted news article having anything to do with the Christian stones in our nation’s foundation.

Just this week a story about another school taking down a student-donated 92-year-0ld plaque hit the news. The comment sections of various sources that published the story were overflowing with arrogant atheists preaching the virtues of “separation of church and state.” Obviously, their hatred of Christianity (not so much the desire for pluralism) was fueling their snarky vitriol.

As if the trolls got together beforehand and decided what would be the most effective “shut up the enemy” type of argument, one of the most common mic-drop-type attempts to end any defense of the Ten Commandment plaque went like this:

You see, the whole reason for posting the Ten Commandments is not to “promote” a particular faith (btw, it’s not just Christianity that claims the TC’s; they came to the Jews, first!), but to recognize the foundational source from which our nation derived its inspiration. Fact is, Islam had NOTHING to do with the founding of our country, especially not Satanism; therefore there is no historical context to warrant the erecting of plaques them or any other religion or religious texts – the Bible and Christianity alone were supremely instrumental to the Founders and the documents they created to form this country.

At the VERY LEAST, the majority of  our founding fathers, even though they did not want to establish a national church or officially promote one religious sect over another, were very religious, and they admitted the country they envisioned would fail if the people inhabiting it were not.

How can I make such a bold statement? Where’s my proof?

The rest of this article will consist of quotes from our Founding Fathers. Their words should speak for themselves.

In Their Own Words

“It is religion and morality alone which can establish the principles upon which freedom can securely stand. The only foundation of a free constitution is pure virtue.” – to Zabdiel Adams on June 21, 1776

[W]e have no government armed with power capable of contending with human passions unbridled by morality and religion . . . Our constitution was made only for a moral and religious people. It is wholly inadequate to the government of any other.” – 1798

Charles Carroll of Carrollton (Signer of the Declaration of Independence)

“Without morals a republic cannot subsist any length of time; they therefore who are decrying the Christian religion, whose morality is so sublime & pure, [and] which denounces against the wicked eternal misery, and [which] insured to the good eternal happiness, are undermining the solid foundation of morals, the best security for the duration of free governments.” – from a letter to James McHenry, November 4, 1800)

Benjamin Rush (Signer of the Declaration of Independence)

“The only foundation for a useful education in a republic is to be laid in religion. Without this there can be no virtue, and without virtue there can be no liberty, and liberty is the object and life of all republican governments.” – 1806

“We profess to be republicans, and yest we neglect the only means of establishing and perpetuation our republican forms of government, that is, the universal education of our youth in the principles of Christianity by the means of the Bible. For this Divine Book, above all others, favors that equality among mankind, that respect for just laws, and those sober and frugal virtues, which constitute the soul of republicanism.” – 1806

(When the Constitutional Convention was deadlocked) “I have lived, Sir, a long time, and the longer I live, the more convincing proofs I see of this truth – that God governs in the affairs of men, and if a sparrow cannot fall to the ground without His notice, is it probable that an empire can rise with His aid?” – June 28, 1787

The hand of Providence has been so conspicuous in all this time that he must be worse than an infidel that lacks faith, and more wicked that has not gratitude to acknowledge his obligations…” – from a letter to Brigadier General Thomas Nelson, August 20, 1778

“And now, Almighty Father, if it is Thy holy will that we shall obtain a place and name among the nations of the Earth, grant that we may be enabled to show our gratitude for Thy goodness by our endeavors to fear and obey Thee.” – private prayer, 1779

“The rights of the colonists as Christians…may be best understood by reading and carefully studying the institution of The Great Law Giver and Head of the Christian Church, which are to be found clearly written and promulgated in the New Testament.” – from Rights of the Colonists, 1772)

John Hancock (first to sign the Declaration of Independence)

“In circumstances dark as these, it becomes us, as men and Christians, to reflect that, whilst every prudent measure should be taken to ward off the impending judgments . . . all confidence must be withheld from the means we use; and reposed only on that God who rules in the Armies of Heaven, and without whose blessing the best human counsels are but foolishness – and all created power vanity,” – April 15, 1775, as Hancock signed a proclamation for a day of fasting and prayer

Roger Sherman (Signer of all four of the major founding documents)

(In a speech to Congress) “Admiring and thankfully acknowledging the riches of redeeming love, and earnestly imploring that divine assistance which may enable us to live no more to ourselves, but to him who loves us and gave himself to die for us.”

Literally, I could go on and on and on… but I have 4th of July (Independence Day) celebrations to attend – and even a couple of weddings to perform! Tonight, I’m going with my family to a baseball game, after which will be fireworks! How American is that?!!

God bless America! And, may we be bold enough and informed enough to fight for the right to publicly acknowledge His blessings, despite what the Freedom from Religion Foundation and all the religion-hating trolls want to accomplish.

Oh, but wait… There’s just one more quote from John Adams that I need to squeeze in… because it has a direct bearing on the historical context of posting the Ten Commandments…

“The moment the idea is admitted into society, that property is not sacred as the laws of God, and there is not a force of law and public justice to protect it, anarchy and tyranny commence. If ‘Thou shalt not covet,’ and ‘Thou shalt not steal,’ were not commandments of Heaven, they must be made inviolable precepts in every society, before it can be civilized or made free.” – Source: The Works of John Adams, Second President of the United States, 1851, Vol. VI, p. 9

Now THAT’S a “mic drop” quote if I ever heard one!

All men shall be secure in the Natural right, to worship Almighty God according to the dictates of their consciences.

This is the final installment in the series (unfortunately, I posted them in the order I took the pictures, not in alphabetical order). I hope you’ve enjoyed them as much as I’ve enjoyed sharing them with you.

Let me know if you find putting them all under one tab at the top of the blog useful. I’d love for them to be shared, and that might make it easier.

God bless, and God bless these United States of America! 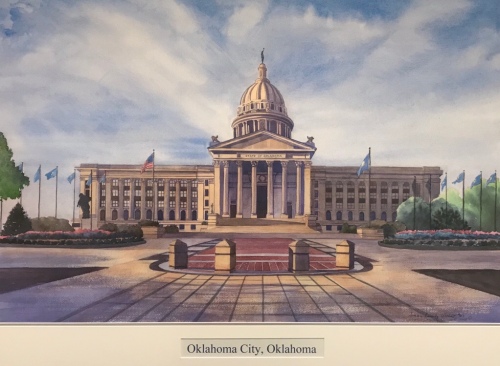 Invoking the guidance of Almighty God, in order to secure and perpetuate the blessings of liberty…we, the people of the State of Oklahoma, do ordain and establish this Constitution.

In 1997, the American Civil Liberties Union filed a lawsuit challenging the constitutionality of the motto. A three-judge panel of the U.S. Sixth Circuit Court of Appeals ruled 2-1 in 2000 that the motto violated the separation of church and state. in 2001, the full court in a 9-4 decision reversed the decision of Its own three-judge panel declaring that the motto does not violate the separation of church and state.

The free exercise and enjoyment of religious profession and worship, without discrimination or preference, shall forever be allowed in this state to all humankind.

You folk in New York should remind your lawmakers of this. I have a strong feeling it’s been forgotten or overlooked, but I’ll let you be the judge.

On that note, I think I’ll send a shout-out to my New Yorker friend at Beauty Beyond Bones 🙂 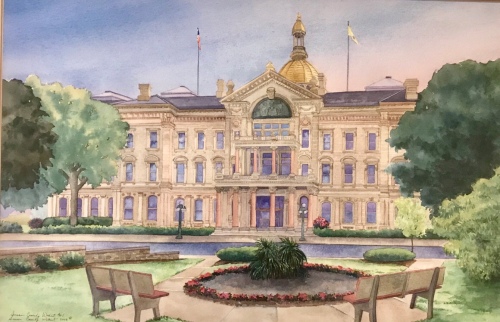 No person shall be deprived of the inestimable privilege of worshiping Almighty God.

Every individual has a natural and unalienable right to worship God…and no subject shall be hurt, molested, or restrained…for worshipping God.

We, the people of Wisconsin, grateful to Almighty God for our freedom…do establish this constitution.

Since through Divine Providence we enjoy the blessings of civil, political and religious liberty, we, the people of West Virginia reaffirm our faith and constant reliance upon God.

Let’s look at that again:

“…we, the people of West Virginia reaffirm our faith and constant reliance upon God.”

Sounds a lot like another embattled phrase, doesn’t it?

“In God We Trust”

To read the introduction to this series, CLICK HERE.

That all men have a natural and indefeasible right to worship Almighty God according to the dictates of their own conscience.

Tennessee is my home State. I am thankful that the Constitution of my State affirms my right to worship Almighty God according to the dictates of my conscience. However, federal law trumps State law, and one day this freedom may be taken away in its entirety. Nevertheless, the right to worship God is not a right given by Tennessee or Washington, D.C.; it is a commandment given by the Almighty, Himself.

Should the right to worship according to the dictates of my own conscience be denied, including the right to publicly speak the name of Jesus, I will have to echo the words of Peter in Acts 4:20, “We cannot but speak the things which we have seen and heard.”

The dictates of any constitution will have no bearing on the command to “go into all the world and preach the gospel,” including Tennessee.