Observations from a Middle-Georgia Pastorate: Standing In the Gap

Last week I got to see the reenactment of the occupation of Sandersville, Georgia. It was the 155th anniversary of the battle that left a few dead (not like the 10’s of thousands in other battles), a courthouse burned, and a citizenry who was thankful it didn’t turn out much worse.

In November of 1863, General William T. Sherman and the Union army marched into the Sandersville area, just 10 miles or so south of where I sit right now. A skirmish broke out between some of the advance Union cavalry and the Confederates under General Joseph Wheeler. This led to more fighting and a near-disastrous misunderstanding.

Below is a video I made of the reenactment in the Sandersville town square.

General Sherman (the “march to the sea” Sherman who’s tactics embodied the term “scorched earth”) thought it had been the citizens of the town who’d fired upon the Union troops, and he was furious. He didn’t know it was Confederate soldiers. Therefore, after entering the city, he intended to burn it to the ground.

That was when the Rev. James Anthony, a Methodist pastor, went to General Sherman to beg for the city to be spared.

Before I get back into the history of the battle and the main point I want to share, I must tell you about what I felt while videoing the reenactment.

If it had been 20 or 30 years ago, maybe even only 10, I would have watched this display of musketry and role playing as “totally cool!” I mean, you’re talking to a guy who “played army” all of his young years, up into his teens. Seeing all that action, especially that close, would have been awesome.

Yet, as I stood there on the curb letting my imagination get into the act, I was surprised by my sense of sorrow, of fear, and the tears that began swelling up in the bottom of my eyes. From the moment the two horsemen rode into town warning of the impending and unstoppable invasion, to the point where men and boys were point-blank shooting at each other right in front of me, my heart sank.

There was nothing “cool” about this at all; it was utterly sad. 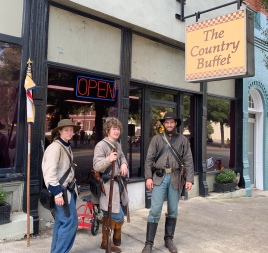 So “country” even the Confederates eat here 🙂

After it was all over, a deacon from our church saw me and invited me to have some tea (sweet, of course) in the little buffet right behind where I had been standing. Sitting there in the restaurant, the surreal scene of muskets lining the walls and “wounded” Confederates eating fried chicken, we talked about what we had seen.

He had felt the same way I did.

He had been standing down around the corner (where the video ended), and he said that when they came around and started shooting at “our boys,” he couldn’t help but shed a tear. He said, “This really happened.”

Back to the Story

So, upon hearing that General Sherman was going to burn Sandersville, Rev. Anthony went to Sherman to beg for the town. He finally convinced him that it wasn’t the people who fired on the troops, but opposing forces that had already fled.

When Sherman heard that Rev. Anthony had also been kind to a wounded Union officer and kept him from being executed, he accepted the pastor’s request and spared all but the courthouse and other government buildings. Sandersville survived because of the brave actions of a pastor who put his own well-being on the line.

There’s a lot more to the story of Rev. James Anthony and his conversation with General Sherman. You can read about it by simply Googling his name. But as I stood there in the city square and heard the reenactment of the conversation between Sherman and Anthony, I could not escape the similarity between the Reverend’s name and mine.

I couldn’t escape the following passage that has been a “life verse” of mine for decades:

And I sought for a man among them, that should make up the hedge, and stand in the gap before me for the land, that I should not destroy it: but I found none. – Ezekiel 22:30

If only more pastors would stand in the gap!

If faced with an invading army, would I have the courage to risk everything, stand face-to-face with the conquering General, and beg for the lives of my people as Rev. James Anthony did?

Do I not have that opportunity even now?

But on my knees?

One response to “Observations from a Middle-Georgia Pastorate: Standing In the Gap”