This evening I stopped by Krispy Kreme to buy some donuts and coffee for my wife and me (Actually, the coffee was for me – she hates coffee). We did so in order to celebrate something special, but I can’t tell you what the special thing was – it was just special. 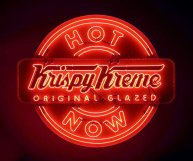 Anyway, we got donuts…I got coffee. That’s all you need to know about that part.

By the way, tonight was the first night I ever saw a deformed donut come off the line. It made me wonder if Krispy Kreme had a museum somewhere to keep the really unique ones.

A short time later, as we were pulling into our driveway at home, I retrieved my recently-purchased coffee from the cup holder and brought it up to my lips. It was at this time a story came over the news which was then playing on the car radio. Permit me to paraphrase what I heard…

“Due to a recent surge in deaths, Russia is launching a new public awareness campaign to advise people of the dangers of taking selfies…”

Right about now I had brought my disposable paper cup full of black coffee to my lips and had begun to fill my mouth with said black coffee. The story continued, though, before I could swallow the ounce or two now bringing pleasure to my palate…

“The Russian government is using graphics to warn people that it is not safe to take selfies while standing on railroad tracks, putting a gun to one’s head, or while standing beside a tiger…”

I almost spit the entire contents of my mouth – the previously-mentioned black coffee – onto my steering wheel!

Tigers? …What the heck!?

Now, it wouldn’t surprise me to read about some dude from Alabama taking a selfie with a gun to his head. I mean, after all, do you know what the most common last words of a redneck are? “Hey! Watch this!”

Sure, I’ve taken selfies with a monkey, even made whole videos (see below)! And yes, I’ve even taken a few calculated risks – like the time I filmed on the beach…and at the zoo…and in a real hospital…etc.

But a tiger? Only in Russia.

Here’s the story. Just don’t be drinking coffee when you read it.