My Mayor’s Email, and My Response

The following is the email sent to me from Mayor Andy Berke, the Mayor of my city, Chattanooga. I wanted to share it with all of you so that there would be no misquoting him. It is my personal opinion that Mayor Berke is doing nothing more than jumping on a political bandwagon while the chance for getting points from his left-wing constituents is highest. Had this been an issue – ever – he would have brought it to our citizens years ago.
You can read my response in the conclusion of this post.

Last weekend I watched in horror and dismay as events unfolded in Charlottesville. That feeling was compounded as the President failed his leadership test to condemn bigotry and domestic terrorism. As I sat glued to the headlines, I thought about how the basic American values I had been taught by my family and my teachers — equality, liberty, community — were being subverted before our very eyes.

One thing is certain — racism, hatred and violence don’t belong in any American city, and that includes Chattanooga. Our city opposes white supremacy in any form and under any name, and we expect the same from our leaders.

That’s why I have asked our City Attorney to file paperwork to remove the City as a trustee of the Confederate Cemetery on Third Street. Owned by a trust, the city was named as trustee of the cemetery by a local court as far back as 1942.

Our city should be invested in our future, not a discredited past. Confederates fought against America to preserve slavery. That is the truth, and we should no longer subsidize any myths to the contrary.

This action today makes it clear that the City of Chattanooga will not condone any traces of the racism that taints our past. Our city is not immune to challenges, and we have proven that we can rise to the occasion by coming together, united.

It’s time to act. Speak up, donate to groups fighting white supremacy, and call your elected officials. Get involved with nonprofits in Chattanooga that are working every day to improve lives like Urban League, NAACP, the Jewish Community Center, the Islamic Center, TN Valley Pride and La Paz. Respond with action — the Southern Poverty Law Center offers this guide of 10 ways to fight hate. That’s not all we can do. Today, report discrimination, get involved with the Ed Johnson Project, become a fair housing tester, and work on Chattanooga’s MLK Day of Service.

Now, more than ever, it is important that we remain a Chattanooga united for progress.

Your desire to absolve the City of Chattanooga from taking care of the Confederate Cemetery is an affront to Chattanoogans, including the ones buried in those graves (and not all buried there were Confederates). Should you file the paperwork and go ahead with your plan, keep in mind that you are doing a disservice not only to our deceased loved ones, but to those dead who were officially recognized by our federal government as American soldiers.

“Every soldier’s grave made during our unfortunate civil war [sic] is a tribute to American valor… And the time has now come… when in the spirit of fraternity we should share in the care of the graves of the Confederate soldiers… and if it needed further justification it is found in the gallant loyalty to the Union and the flag so conspicuously shown in the year just passed by the sons and grandsons of those heroic dead.” …President William McKinley, 14 December 1898.

And considering the previous words of President McKinley, I think it would be wise to think pro-actively as to preserving and protecting certain monuments and statues on City property. It may come as a shock to you, but it was just in 2010 that the Veterans’ Affairs Office spent money allocated to them by President Obama’s Recovery Act of 2009 to restore 5 Confederate monuments (see link to V.A. memo HERE).

For further consideration, you might have the city attorney (and your voters) reconcile your request with the following: 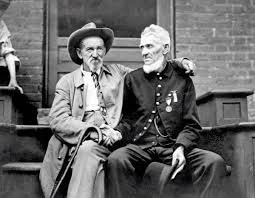