A Final Sendoff from Chattanooga – by the Sheriff!

For the last three years, or so, I was honored to be able to serve the deputies and staff of the Hamilton County Sheriff’s Department (Chattanooga, TN) as a Police/Patrol Chaplain.

Now that I am living in middle Georgia, it’s pretty difficult to be a chaplain to police officers 250 miles away. Therefore, I had to resign, of course.

Well, as a final sendoff, I was asked if I could come back to Chattanooga to receive a special certificate of commendation from Sheriff Jim Hammond, along with a challenge coin, recognizing me for my service. Three years is not a long time to be recognized for, but possibly because of the nature of the position and the transitions within the department, a little more than a “thanks, see ya later” goodbye was in order.

So, there in the Command Staff conference room of the Hamilton County Courthouse – where every time the Sheriff gathers his top officers for weekly meetings and has a chaplain open in prayer, give a devotional, and close in prayer – Sheriff Hammond read aloud the commendation.

Many years ago my father volunteered to be a patrolman with the Hamilton County Sheriff’s Office and served with distinction. Later, after my family was rocked by sickening crime, and in the middle of the nationwide protests against police officers, I decided to do more than say “I support the men in blue;” I decided to get involved.

Now, as I settle in as a pastor in a different state, I hope to find a way to continue serving those who put their lives on the line for us every day, year after year. I hope to be able to continue serving in the capacity of a Police Chaplain here in Washington County, GA. Unfortunately, anything official will have to wait until after the election of a new sheriff to replace the one who recently took his life. 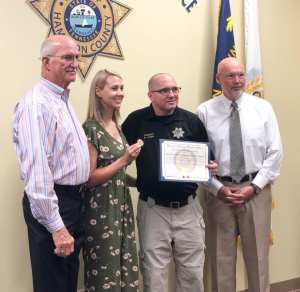 Terri and Allen Lindon, along with Sheriff Hammond and Allen’s father.

I wasn’t the only one who got a commendation last Tuesday morning. Pastor Allen Lindon was also honored for his 7 years of service as he stepped down from his duties as Chaplain.

Allen was not only a Chaplain, but he was a reserve deputy – meaning he was a sworn officer and did everything a normal deputy would do, including carry a weapon and make arrests. We really got to know each other when we shared a room for a week at the ICPC training in Louiville, KY. Allen was as  fired up and sold out as they came, loving what he did with a passion. He was never afraid to scrap it out with the roughest of characters, even if he was a volunteer wearing a cross.

Unfortunately, while working on some signage at his church property, Allen fell 20ft from a ladder and landed on his head. The damage was severe, the recovery has been rough, and after literally dying three times, it’s time to take a break from chasing criminals and focus simply on souls in Cleveland, TN.

I may have gotten a commendation from the Sheriff, but Pastor/Chaplain/Deputy Allen Lindon really deserved all the honor that day.

Below is a video I made after attending the ICPC conference last year in Louisville. We all had a great time! I’m really going to miss these guys.

2 responses to “A Final Sendoff from Chattanooga – by the Sheriff!”