June 6th… Would We Do It Again?

Seventy-four years have passed since the pride of the Allies, 156,000 strong, stepped out of landing craft and jumped out of airplanes into the mouth of a monster ready to eat them alive.

Seventy-four years have passed since young men from America, England, and Canada (and we must not forget Australia, Belgium, Czechoslovakia, France, Greece, the Netherlands, New Zealand, Norway and Poland) landed on beaches called Utah, Omaha, Gold, Juno, and Sword.

Seventy-four years ago, long before the fancy rock-climbing walls which are so popular in today’s health clubs and gyms,  the 2nd Ranger battalion “led the way” up the 100 ft. cliffs of Pointe du Hoc.

Seventy-four years ago men were stepping on the backs of their comrades as they sloshed through red water, breathed in the mist of war, and wondered if they would live to see the ground only yards (meters) in front of them.

It is the 6th of June, 2018, but are we still a people with the stomach to liberate? If we were the ones living seventy-four years ago, where would we be today?

Ask those who take a knee, or hide in a locker room when the anthem is played.

Ask those who protest the same American flag that their African-American ancestors fought and died for – the same ancestors who fought in segregated units, but were still ferociously proud to be Americans. What did the pilots of the Red Tail Squadron do when the flag was raised and the anthem was played?

For that matter, what did Tuskegee Airmen Dr. Harold Brown, a pilot with the renowned 332nd Fighter Group in World War II (an all-black squadron) say when asked the following question during a recorded conference call: “Why [when the slavery trappings, the discrimination was all there] would you raise your right hand and swear to defend this country?”

“Oh, that’s very, very simple, in my opinion. I was a citizen of the United States of America! This was my country, too! Even though it had some shortcomings, it was still the greatest country in the world. There is no other country I would ever trade for it.” (Feb. 28, 2018)

Ask those who are burning the American flag because “America was never great.”

Ask the protesters who don’t even know why they protest. 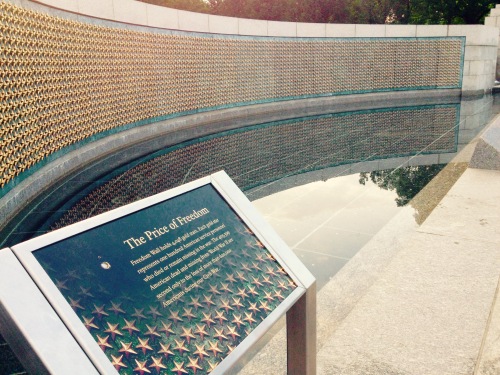 The reflection pool at the WW2 Memorial in Washington, D.C. Each gold star represents 100 Americans who died or remain missing during the war.

It cost a lot to buy seventy-four years of freedom. Would we do it again?

If we could get them out of the locker rooms, maybe. But first, they would have to be willing to fight to defend something, and too many no longer believe what was purchased with the blood of others is worth fighting for.

Would we be willing to do it again?

If not, God help us.