I Shocked the Sheriff, But I Did Not Shock the Deputy 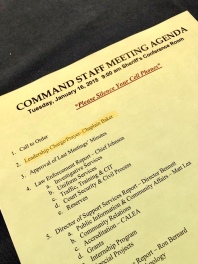 This morning I was once again honored to offer the “Leadership Charge/Prayer” at the beginning of his weekly Command Staff meeting. It’s just one duty that I perform as a chaplain with the Hamilton County Sheriff’s Office here in Chattanooga.

If you are unfamiliar with what I’m talking about, once a week our Sheriff (Jim Hammond) holds a meeting with his Command Staff (all the captains and chiefs over the different divisions of the department). At each of these meetings one of our chaplains opens up the meeting with a charge/devotion and prayer, then later closes the meeting with prayer. And since the Sheriff is not only an intimidating figure in his own right, but also a student of the Bible, it’s always encouraging when he doesn’t find fault with what we say. LOL!

Since today was the 16th of the month, I decided to see if there was something from the 16th chapter of Proverbs that might be applicable. So, I went to ProverbialThought.com and found the commentary I had written for verse seven.

Proverbs 16:7 became the text, and my post on the verse (click this link to read) became my 5-minute sermonette. 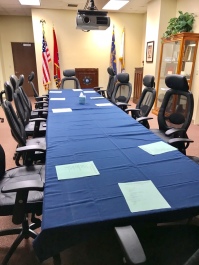 My seat was next to the corner on the left.

There, from my seat at the table, I spoke to the Sheriff, his staff, and his captains of the need to please the Lord, not men. I spoke of God’s commandments and how that when we keep them, even our enemies have a hard time finding fault with us. Then I read a verse from the New Testament:

“It comes down to a simple choice,” I said. “Do we try to make people happy, or do we try to please the Lord?” If all we care about is pleasing people, we will always fail; they are too finicky. But if our goal is to do everything we do to please God, He will handle the rest – including our Sheriff’s upcoming election.

So, what about “shocking” the Sheriff and not the deputy? Nobody was shocked, not even the Sheriff; I did what was expected of me.

It was a catchy title for a post, though 🙂 Wasn’t it?

4 responses to “I Shocked the Sheriff, But I Did Not Shock the Deputy”