Hide In the Rock, or Be Wolf Poop…Your Choice

“There be four things which are little upon the earth, but they are exceeding wise: … The conies are but a feeble folk, yet make they their houses in the rocks” – Proverbs 30:24, 36

The conies are second in the list  “four (little) things” that are exceedingly wise. But what is a coney? Is it a hot dog found on Long Island, New York? Possibly, but only if a legless wiener is capable of wisdom. These conies in this proverb seem to have a defense against being eaten with mustard – they hide in the rocks. 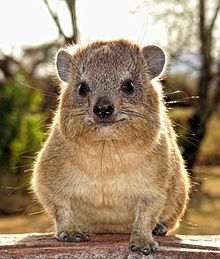 The animal described here is the hyrax, or rock badger (no relation to the kind that can chew off your arm). Found in Africa and the Middle East, these cute little critters, weighing an average of 8 lbs., are scavengers which live in groups of 8 to 10 and find refuge in the cracks and crevices of rocky terrain. Though scientists say the hyrax is a close relative to the elephant (it even has tiny little tusks – how cute!), this furry little animal is practically defenseless…at least on its own.

Even though hyraxes are small, weak, and incapable of fighting off a predator, they are not on the endangered species list. Why is that? The answer lies in where they make their homes – in the rocks – and how they look out for each other.

Being small and rather slow, the hyraxes in Africa are preyed upon by other animals such as wild dogs, leopards, and Egyptian cobras. However, it seems that the conies in Israel, like the ones of which Solomon spoke, have learned how to use the rocks to their advantage, along with a “system of sentries.”

“In Israel, the rock hyrax is reportedly rarely preyed upon by terrestrial predators, as their system of sentries and their reliable refuges provide considerable protection. Hyrax remains are almost absent from the droppings of wolves in the Judean Desert.” (Wickipedia)

Is it any wonder why Solomon called the conies (hyraxes) “exceeding wise?” Knowing the danger posed by wolves and the like, the defenseless animals band together, watch over each other, and run to the rocks any time there is a threat.

One would have to be blind to miss the parallels here. Why do so many fools fall victim to the ravenous wolves of the world? Their bones are found scattered across the sands of time because they ventured out alone, without the watchful eyes of others, and without the defense available in the true Rock of Ages, Jesus Christ.

Why won’t more people heed the wisdom of Proverbs? Why do so many of us continue to be eaten alive by the enemy when there is a Rock in which to run and hide?

4 responses to “Hide In the Rock, or Be Wolf Poop…Your Choice”