The Day After Father’s Day

Please forgive me if there are any grammatical or spelling errors in this post, but I am talking into my iPhone as I’m walking around in the rain (The seven can handle that kind of stuff, thankfully), waiting while a bus driver trainee is taking his test at the DMV. I had to bring a school bus down for him to test own, so I’m on the clock and writing a post at the same time. What do you think about that?

Anyway, today is the day after Father’s Day, and I wanted to share with you a thought or two that I had as I was standing in the rain.

Yesterday was a wonderful day, and I enjoyed preaching a great message that was very convicting for all men present, including myself. And I also enjoyed spending time with my daughters who I love very much.

One of our daughters lives in Charleston South Carolina, so she’s not able to be here. But the other two were in church with me yesterday, and then later for a lunch which a church member graciously provided the money for.

Last night we ate dinner at home, late, and that is when my two younger girls gave me the presents that they purchased (with their own money!). I have included a picture below. 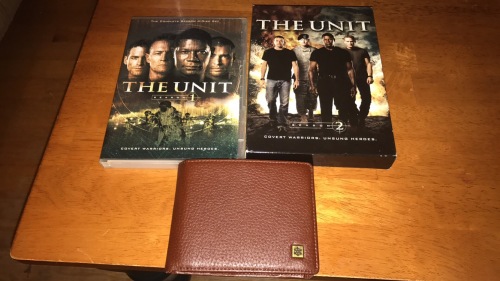 My youngest daughter, Haley, procured for me the complete box sets of the first two seasons of the television program called “The Unit.” And by the way, that was a fantastic series of which I think they should have never canceled.

The other daughter, Katie, brought back something very unique from Norway. She found a wallet made from the skin of the Nordic moose! I don’t know how much she paid for it, but I know it had to cost more than something I would’ve gotten at Walmart.

After both presents had been opened, Haley asked a question which was very difficult, if not impossible to answer. She asked, “Which one is your favorite?” Now, I don’t know if she was being facetious, or if she was being serious, but my wife quickly answered for me: “That’s like asking which one of you he loves the most; he loves you the same, just differently.”

One of those gifts cost a lot of money (relatively speaking), while the others probably cost a lot less. However, based on the means of each daughter, both were a sacrifice. In the same way, when we go to church to worship God, the gifts and offerings we bring may cost one person a lot more than it cost another. But who are we to judge whether or not those gifts that were given were sacrificial? We don’t know the heart of the child, nor do we know the heart of the Father. All we can surely know is that if the gifts were given out of love, then they are of equal value. More so, if the Father truly loves his children, which He does, there’s nothing that can compare to those gifts given by the children who love Him.

So, in conclusion, this is not only the day after Father’s Day, this is the day after Sunday. What gifts of love did you give your Father in heaven yesterday? I have no doubt they are giving him a smile today.