What Are You Worth?

What would you die for?

What is so valuable that you would risk or even sacrifice your own life? Have you ever stopped to think about that? You should.

The typical things in life that are considered so valuable, when put in perspective, aren’t really worth that much. Even the most “priceless” treasures are not worth your life – or are they? Would you fight a thief for your purse or car? If so, you are saying those things are more valuable than your life, for you are willing to risk your life to keep them. It is how people die every day in the pursuit of, and the keeping of earthly possessions. Pretty foolish.

What about non-concrete items, such as pride? Some people are willing to fight to the death, or kill others, when insulted or “dissed.” Perception is NOT reality, just as integrity is not determined by opinion; yet, some would rather risk death than be wrongly perceived.

Is family worth risking your life? 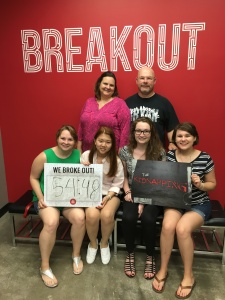 As close to a recent family photo that I have. But hey, we escaped in time!

Really, there is no argument against this one. But on the other hand, society has a difficult time determining the value of life; one life is not as valuable as another if convenience or personal pleasure is at stake.

I would risk my life to protect my family, and if you doubt it, try to hurt them – I carry more than a big stick.

Many, however, kill their own children before birth.  It seems to me that society values gold more consistently than life itself.

Are you willing to die for what you believe?

Now this, I know, could open up a whole can of worms; but that’s OK. Just stop and think about it for a moment. Do you believe in anything so much that it is worth more than your own life? When your life is on the line, knowing the difference between what you believe and what is only opinion is of key importance. A martyr is one who would rather die for what he believes than deny it.

Is your faith worth dying for?  If not, then how much do you really believe?

How much is YOUR life worth?

Value is determined by what someone is willing to give for it, right? That’s typically the way it goes. So, if nothing on earth is more valuable than your life, does that make your life valuable? Well, maybe to you.

Think about it, to someone else your life might not be as valuable as their own. Would you value the life of a total stranger so much that you would offer your own in exchange? I mean, really? Someone may even be willing to give all of the world’s riches in order to obtain your life, but are you worth it? Who would even have that kind of wealth? That leaves you with nothing more than your sense of value compared to another’s; your worth against theirs.

Value is relative to the thing for which the buyer will exchange.  That’s a disturbing thought, isn’t it?

On the other hand, what if the Creator of the universe offered to die for you?

But God demonstrates his own love for us in this: While we were still sinners, Christ died for us. – Rom 5:8 NIV

That would make your worth INCALCULABLE! The King of Heaven, the Son of God, gave His own life in exchange for yours, even accepting your guilt and failures as His own, and payed the death penalty for sin on your behalf.

For he hath made him [to be] sin for us, who knew no sin; that we might be made the righteousness of God in him. – 2Corinthians 5:21 KJV

That makes you valuable; Jesus unique. How many others have done what He did for you? Most of us would die for our children or spouse.  Some of us would die for a friend or maybe a good person.  But how many of us would give our own life to purchase the life of a stranger, much less a convict, drug dealer, murderer, etc?  Jesus did.

That’s the whole reason for Christmas, you know.  Jesus had to come to earth as a baby to grow into the Man that would willingly go to a cruel cross.  The gift of Christmas is the gift of life, purchased with the life of the Giver of Life. How ironic is that? How wonderful?

Don’t believe the lies told to you by Satan, the culture, or your depressed emotions. Your life is of immeasurable worth because of the immeasurable price offered for it.

If you are worth that much, and if that kind of price was paid, don’t you think giving your life to Jesus is a fair exchange?

Tagged as Christ, God, help me, Jesus, kill myself, nobody loves me, salvation, self-worth, suicide, take my life, value of life