It may have never crossed your mind, but it’s pretty common to have complaining children on a school bus. Really? Yeah, really.

But every once in a while this fortunate driver is blessed with a child or two who has no concept of social skills, much less an understanding of what is or isn’t fair. Therefore, should anything at all not go their way, the usual response is a river of tears, an emotional breakdown, and the inevitable attempts to make deals.

Honestly, these kids will drain all the energy from you. Had we not already had three children, I would have been the one in the marriage to claim a headache, even on the honeymoon.

This week, the big argument with my ever-complaining, ever-competing, socially-challenged, inconsolable brother-and-sister tag-team was who would be the first one to get off the bus when they arrived at their stop. Dear Lord! Help me! Why??

At one point they started playing “Rock, Paper, Scissors,” but they ended up finding ways to cheat. Then they tried a game of “Quiet Mouse,” but who were they kidding? Nothing they tried helped them decide who would get off the bus first, especially when the loser of any game they played wanted a do-over.

Finally, I came up with an idea. 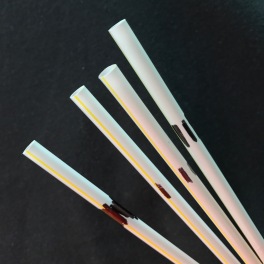 These are the actual straws I used.

At first I thought about the whole “short straw” thing, but then I decided to modify it for the occasion. Since a total of four elementary children would be getting off at the last stop, I took four drinking straws, grabbed a Sharpie, and marked on each one.

I said, “I have four straws, and each of you are going to pull one out of my hand. If you pull out the one with only one mark on it, then you can get off the bus first.”

“Can I have that straw,” asked the little girl?

The little brain surgeon never missed a beat, “Well, can I pick that one, then?”

So, as you might have guessed, once it got down to actually drawing straws with marks, nobody got the straw they wanted, except the kid who drew the straw with one mark – and that kid didn’t really care!

Picture, if you would, a little boy flopping around in the seat, kicking, and bellowing out through snot and tears, “But my sister CAN’T go in front of me! It’s not FAIR!”

After having all I could take I looked in my rear-view mirror and said, “You know what? Life isn’t fair! You don’t always get what you want!”

Then something profound hit me: “What if life IS fair, but it’s just that we are selfish and don’t want to accept the results of the straws?”

If there was anyone in history who could have claimed that life wasn’t fair, it was the Apostle Paul. I mean, good grief, this man had everything in the world happen to him! He was beaten, shipwrecked, imprisoned, starved, and a whole bunch of other things – all for trying to do what was right. Was that fair?

But what did Paul have to say about all the things he endured?

“…I have learned to be content, whatever the circumstances.” Philippians 4:11b (NIV)

Maybe if we were a little more like Paul, having the mind of Christ (Philippians 2:5), drawing the wrong straw might not matter as much. Maybe we could better accept our position in line and wish the best for others going before? Maybe we could see the sovereignty of the Master Marker of Straws at work and learn to be content?

Maybe more of us should just be happy we were allowed on the bus in the first place!

One response to “Fairness Straws”