Friday morning our daughter Katie let our little dogs out to do their business…two came back inside, but one didn’t. When I got home from Atlanta Friday night, little Nugget was still nowhere to be found.

We enlisted the aid of neighbors and a couple of church members to help look. All of us drove around our entire neighborhood, calling, praying, and just hoping there would be some sign…but nothing. And now it’s Monday.

Nugget is a Chorkie (Chihuahua/Yorkie), and in a disturbing “coincidence” two other Yorkies are missing from our same part of town. Was he stolen? Will we find him for sale online? We are hoping.

But another possibility is that our little Nugget, a precious little dog we’ve had since October of 2009, when he was only 2 months old, was taken by a coyote. If that’s what happened, well…

You see, a coyote has been seen a couple of times around our house. One night just a week or so ago my wife and daughters came home, got out of the car, and found themselves being threatened by what they thought at first was a fox (they were wrong – it was much bigger than that). It was at that time Nugget, the bravest little dog you’ve ever seen – a dog whose chased off large dogs and dear – wasted no time tearing off after the coyote, running it out of the yard.

My fear is that the coyote showed back up early Friday morning and Nugget got into a fight he couldn’t win. If that’s the case, our little dog died a hero. And if I find that coyote, I’m going to give it a taste of multiple gut-shattering personal defense 9mm rounds. Yes, I will.

Nugget was such a good little dog. For example, he was always obedient and house trained. If we came to the stairs, either in the house or outside, Nugget would always stand and wait for us to go down first…he would never trip us. When offered treats along with the other two dogs, Nugget would always sit back away from them and patiently wait his turn. 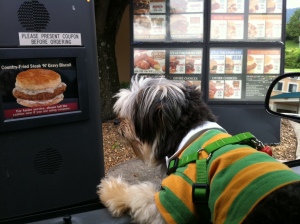 Nugget loved to go for a ride. Many times on Saturdays I would go out to McDonald’s for a cup of coffee. Nugget knew where I was going and would insist to ride along. When I’d get to the drive through Nugget would stand on my leg, put his front paws and head out the window, and practically place his own order – chicken nuggets. And whenever we went to Chick-fil-A, his favorite was a small scoop of ice cream.

Nugget was the only one who would stay up late into the night with my wife during tax season. He would stay right with her, either by her feet or on a little bed she made on her desk. Wherever she would go he would follow. And, yes, he slept with us.

He didn’t shed. He rarely did anything that got him into trouble. He loved to run and be chased. He loved to be held. He thought of himself as more human than the other dogs, for toys were out of the question – he just wanted to be with us.

I know it may sound crazy, but losing Nugget, although not a human child, is almost as painful as losing a human loved one. Nugget was my “little boy.” Because we lived in a house with so many females, Nugget and I would have our “guy time.” Now my little buddy is gone, and there are tears in my eyes and a broken heart in my chest.

My wife and I both are very heartbroken.

Now, some of you may find all this ridiculous. I mean, Nugget was just an animal, right? Sure, but God has created us with the ability to show emotion, to grow attached, and even to love little animals that are so faithful. After all, it could be argued that the best earthly example of agape love is a faithful dog. 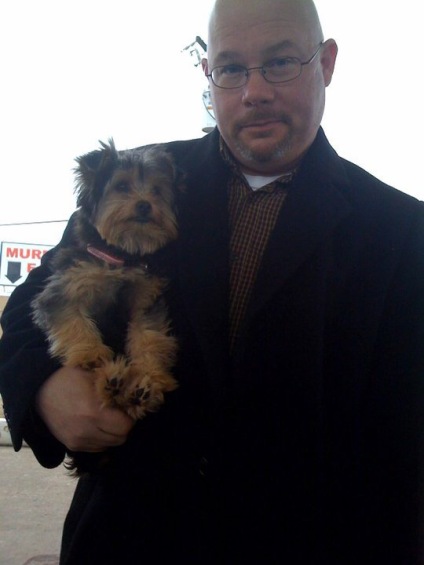 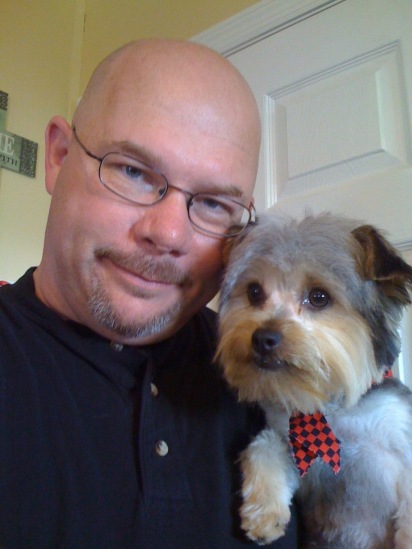 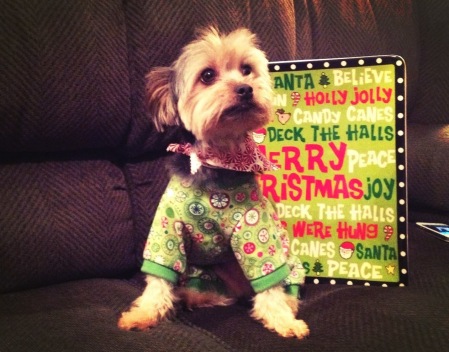 Christmas pajamas – for dogs, too. 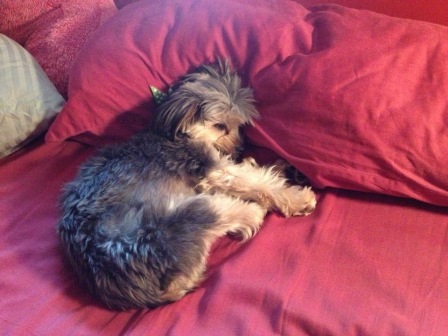 Learned behavior? It was always MY pillow, too! 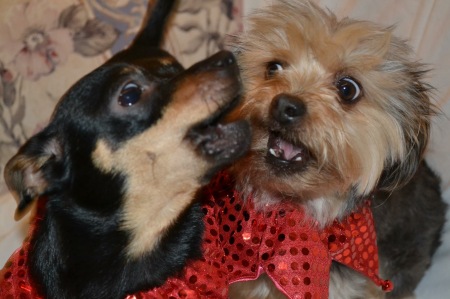 Jack and Nugget arguing about something, I know not what. 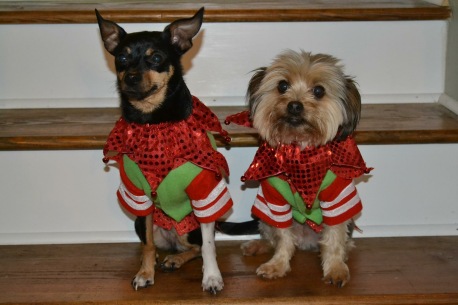 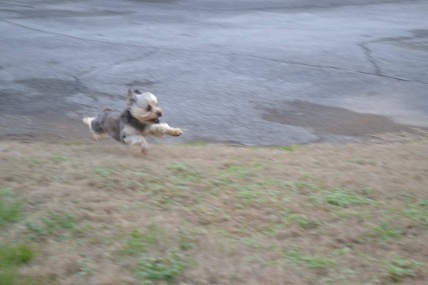 Running out to meet me as I got off the bus. 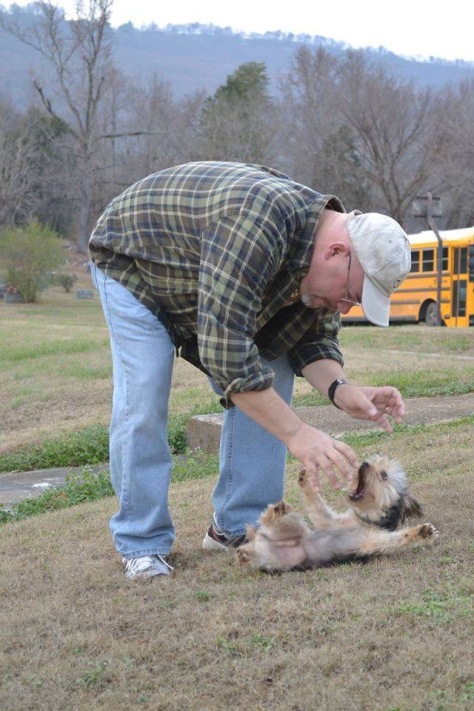 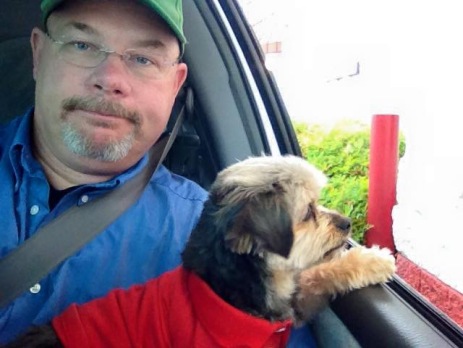 Waiting to place his order, Nugget would even expect chicken from the bank. 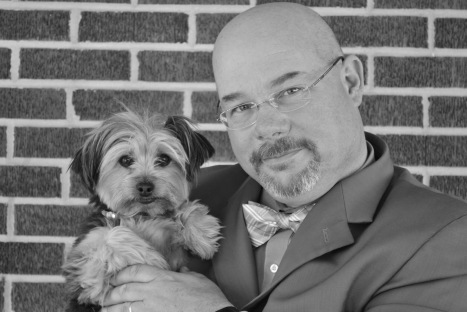 After all the other Easter Sunday family pics, Nugget got to be in one, too.

And, should you read this and think of yourself more spiritual than one who would be heartbroken over a dog, consider the following verses:

And should not I spare Nineveh, that great city, wherein are more than sixscore thousand persons that cannot discern between their right hand and their left hand; and [also] much cattle? – Jonah 4:11

A righteous [man] regardeth the life of his beast: but the tender mercies of the wicked [are] cruel. – Proverbs 12:10

We will miss you, Nugget. You were the best. 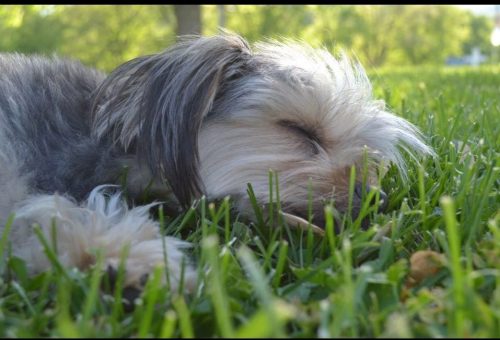 Sleep well, buddy. You earned it.