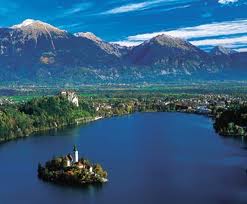 If you have ever read The Chronicles of Narnia series by C. S. Lewis, then you should be able to imagine what a real Narnia would look like. In the fictional Narnia there were beaches, green countrysides, forests, and mountains. Essentially, there was just about every kind of natural beauty in one place, and from Cair Paravel one could see almost everything.

Well, I have never been to Slovenia, but from the pictures I have seen, and from all that I have recently read, this little European country could be the nearest to a real Narnia anyone could ever find. Just go to Slovenia’s official tourism website and look at all the pictures! They are absolutely beautiful!

And if you remember descriptions of Narnia, tell me, doesn’t this description of Slovenia sound almost like the imaginary paradise?

Slovenia is the only country in Europe that combines the Alps, the Mediterranean, the Pannonian Plain and the Karst. The changing landscape is constantly surprising, time and again. You can have one eye on the sea, then look in the other direction and be surrounded by high mountains. Heading up into the forests, you can see the green plains below you. From upland meadows your view stretches into river gorges. This proximity of opposites and contrasts is a hallmark of the country. – from http://www.Slovenia.info

But no matter how beautiful Slovenia is, she is still a nation of people that live in the real world. Hidden amid all the beautiful scenery is a people that have been through many years of turmoil and governmental changes. As a matter of fact, it was only in 1991 that Slovenia officially gained its independence from the former Yugoslavia. Up until then it had always been under the control of somebody else.

However, according to the U.S. Department of State website, the Republic of Slovenia is now a “vibrant democracy” with democratic roots that go back over 1,000 years. Believe it or not, it is said that the way “Slovene farmers contractually consented to be governed by the Duke [of Carinthia] influenced Thomas Jefferson’s drafting of the Declaration of Independence.”

Unlike many small countries, Slovenia is not exactly poor. They are doing well with their economy and have good trading relations with the rest of the world.

But Slovenia does have one need, if nothing else. Slovenia needs to hear about the freeing grace of Jesus Christ. The International Mission Board reported recently that in the capital city of Ljubljana (pop. 300,000) there is only one Baptist church. Most other churches are either Catholic or Orthodox, but there doesn’t exist much evidence of personal faith.

I have had a few hits on my blog from Slovenia, but I would love to see more. But even more than visits to my blogs, my prayer is that more people in Slovenia would echo the words of John 12:21, “Sir, we would see Jesus.”

One response to “Slovenia”