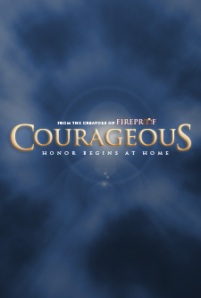 Could I recommend anything more highly than going to see Courageous?

Sure…here are a few examples:

Other than that, I can’t think of too many things I would rather you do, especially if you are a man, than go see this movie. It is THAT good.

From the people that made Facing the Giants and Fireproof comes a movie that should challenge every man to become the courageous leader he was meant to be. Much like a wake up call that resembles ice water in the face and banging trash cans at 0400 (that’s 4 am), Courageous will make any father worth his salt re-evaluate some things.

I will tell you, I was in tears for part of the movie, laughing in another part, tense in three parts, and under conviction the rest. And guys, when you take your wife, make sure you sit a seat away if she startles easily. And if you haven’t been the best husband, you’d better be prepared to make a change. You’ll know if you see her using napkins covered in popcorn “butter” and salt to wipe the tears away from her eyes.

It’s Worth the Ticket Price

Was the acting as good as can be found in an Oscar-winning motion picture? Probably not. But everything else was on par with anything Hollywood and it’s hedonistic values can pump out. Now that Sony has been putting some money into the production, the Kendrick brothers have been able to create a much higher quality product. So, don’t be fooled by critics into thinking its going to be a lame, evangelical, low-budget Church flick. It’s worth the price of a ticket in an HD theater.

When it comes to the plot, I don’t want to give anything away you don’t already know. It’s about policemen, Mexican workers, drug dealers, death, life, and how a real father, not just a one-night-stand-er, can make a difference. It’s about modern day dads making a resolution to be “courageous.”

Favorite scene? Well, let’s just say it has to do with a chicken sandwich, waffle fries, a milkshake, and the Snake Kings.

A final thought. Even though many will still think of this movie as “preachy,” all because it promotes a solid message without resorting to sex, profanity, or any other Hollywood mainstay, one thing remains the same: the Kendrick brothers have not lost their focus. Just look at this quote from the end of a critical review in the Seattle Times:

[The] bigger message might be that the Kendricks haven’t sold out, “gone Hollywood” or watered down their beliefs to reach an audience beyond the faithful.

And God bless them!