I am amazed by so much these days. Even though you’d think I’d know better, especially because I see it all the time, I still find myself in utter amazement at what I read in the media.

“A majority of voters now believe Bret Kavanaugh is guilty.”

How in the eighch ee double hockey sticks is that possible???

Oh, that’s an easy one… the media wants people to believe he’s guilty. The political and social left runs the media, so that’s all the public is going to hear – he’s guilty.

But it doesn’t seem that long ago that a Democrat by the name of Bill Clinton was accused of far worse things than forcing himself on a girl at a drunken party. As a matter of fact, President Clinton was actually accused of rape, pure and simple. Oh, and it wasn’t just one woman who made that kind of claim.

One person (Sen. Kirsten Gillibrand, D-NY) asserted that Judge Kavanaugh must be guilty because he is not calling for an FBI investigation on himself! Well, did Bill Clinton? Uh, don’t think so.

And what about all the supposed shaming of female victims of rape and abuse? Are those in the media too young to remember the term “bimbo eruptions”? That was the term used by Hillary and her team in the 1990’s to describe the regularity of accusations against Bill Clinton. And each one who made an accusation was summarily attacked and destroyed.

Hillary is widely quoted as saying: “These women are trash. Nobody’s going to believe them.”

Hey! You folks in the #MeToo! movement! Is there a statute of limitations on enabling a serial abuser?

Honestly, what I see in the news regarding Judge Brett Kavanaugh is nothing but sickening. Not because I sense that he’s guilty of anything, but because of the hypocrisy of those calling for his lynching. If Judge Kavanaugh had only been a Democrat and was sure to approve of killing babies in the womb, he would have had no problem getting approved.

The media would have been worshipping at his feet.

But if Bill and Hillary Clinton had been Republicans – and let’s not forget about Sen. Ted Kennedy and a certain dead girl in his submerged Oldsmobile – we would have heard calls for the death penalty.

So, in my humble opinion, I think the indignation of the left is sorely misplaced.

Father of the Year? 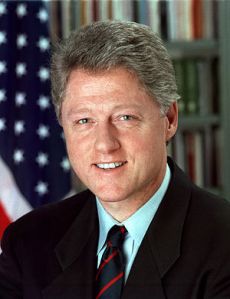 If you have not seen the news, on January 9th former president Bill Clinton was named “father of the year” by The National Father’s Day Committee. My first response was, “You’ve got to be kidding me!” Well, at least that is what I think I said. It’s all a blur too me, now. Sadly, I may have even used the Lord’s name in vain.

Yes, the former president of the United States of America, the man who made the term “Lewinsky” famous, was named “father of the year” in expectation of the upcoming Father of the Year Awards banquet to be held June 11, 2013.

Who in the world is The National Father’s Day Committee?

Have you ever seen those cheap, plastic trophies that say, “World’s Greatest Dad“? They are handed out by loving children all over the civilized world (at least the parts that have Wal-Marts and Dollar Stores). I never knew there was an actual “Council” who determined who was the actual father of the year.

What in the name of all that’s holy caused these people to pick Bill Clinton?

This is the real question. What caused a group of presumably intelligent people to come to the conclusion that the best example of fatherhood this country had to offer was a compulsive womanizer? May I suggest two words? Blue dress! Two more words: Jennifer Flowers!

After doing a little reading, I finally found out what led the National Father’s Day Committee to select Bill Clinton as “father of the year.” Tell me if you think they are worthy of a plastic trophy.

Really? Are they serious? These are reasons to call someone the national “father of the year”? Whatever happened to stuff like faithfulness? Even the Huffington Post (liberal as the day is long) thought this was a joke!

I don’t know about you, but I think they could have made a far better choice for “father of the year” than ol’ “Slick Willy.” As a matter of fact, any man who can check off the majority of the following list deserves a bigger plastic trophy than Clinton ever will.

“Husbands, love your wives, even as Christ also loved the church, and gave himself for it.” – Ephesians 5:25

“Husbands, love your wives, and be not bitter against them.” – Colossians 3:19

“Husbands, in the same way be considerate as you live with your wives, and treat them with respect as the weaker partner and as heirs with you of the gracious gift of life, so that nothing will hinder your prayers.” – 1 Peter 3:7 NIV

And then there’s this guy. He had his daughter pose half-naked to sell a car on Ebay. At least Bill taught Chelsea to keep her clothes on in public. Good grief!