“Let God be True, and Luther a Liar”

The following post (and it’s a long one) was written 8 years ago in 2011, shortly after returning from Florida where I officiated a beach wedding. I thought this piece might be a nice reminder that racism, regardless of the race, is sin. Unfortunately, the best we can do is still going to be flawed. Our only hope is found in God, our Mighty Fortress and Strength.

Forgive me, but I am not a big fan of St. Petersburg, especially in the winter when it is 45 degrees. To me, Florida is supposed to be HOT. The warmest it got last week was in the low 70’s. The water on both coasts was terribly cold; therefore, sightseeing was more appropriate than sunbathing on the beach (which I don’t prefer, anyway). But aside from all of that, I still don’t think I would have liked St. Petersburg, even if it had been in the dead of summer.

However, they did have a few nice museums. 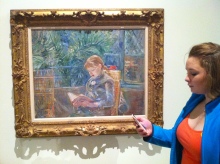 From books to IPhones

One museum we (Katie and I) enjoyed was the Museum of Fine Arts (http://www.fine-arts.org/). Believe it or not, it was the first time that I ever had the chance to stand in a room full of paintings by Monet. It was impressive, especially when you consider how close a teenager could stand next to objects worth multiple millions of dollars. Fortunately for the paintings, teenagers have touch-screen phones to keep their fingers occupied.

Another place we went, at my insistence, was the Florida Holocaust Museum (http://www.flholocaustmuseum.org/). I felt that it was important for the girls to see with their own eyes what true hatred and bigotry, even false religion can do. Not as big, nor as impressive as the museum in Washington, D.C., this museum still told the story well and featured an original cattle car that once carried Jews to the concentration camps.

When we left St. Petersburg, in order to find another beach to help Haley with her science project, at the advice of my brother-in-law, we went to Amelia Island in Fernandina, Florida. Now THAT was a change from St. Petersburg. Through priceline.com we even got a 3-star hotel for $52 a night! Not bad for a place with a huge, clean beach and a small-town feel.

“Big Guns on the Wall”

The highlight to the trip, for me, was when we got to visit Fort Clinch on Amelia Island. The fort was built back in the 1800’s and served both the Conferderate (1861) and the Union troops. It was a massive, red brick fortress overlooking the Atlantic ocean, and was meant to protect the Cumberland Sound. Fully restored, with reenactors playing the part, it was meant to give you the feel of stepping back in time to 1864.

I was really impressed with the fort. Even my wife was amazed. As I stood on its walls with huge canons, or on its proud bastions, I could not help but remember the words to the famous hymn by Martin Luther, “A Mighty Fortress.” 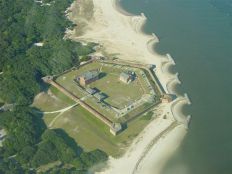 “A mighty fortress is our God,
A bulwark never failing.
Our helper He amid the flood
Of mortal ills prevailing.”

But while at Fort Clinch a painful thought crossed my mind. Just the day before, my girls were able to read other words from Martin Luther in the Florida Holocaust Museum. You see, even though Luther has been regarded as the father of the Reformation, in later life he became very anti-Semitic . In one display chronicling centuries of hatred toward the Jewish people, the words from Luther’s book, “On the Jews and Their Lies,” was written in bold for every Christian to see. Here are some quotes from that book:

“He who hears this name [God] from a Jew must inform the authorities, or else throw sow dung at him when he sees him and chase him away.”

“If we wish to wash our hands of the Jews’ blasphemy and not share in their guilt, we have to part company with them. They must be driven from our country.”

“Moreover, they are nothing but thieves and robbers who daily eat no morsel and wear no thread of clothing which they have not stolen and pilfered from us by means of their accursed usury. Thus they live from day to day, together with wife and child, by theft and robbery, as arch-thieves and robbers, in the most impenitent security.”

“My essay, I hope, will furnish a Christian (who in any case has no desire to become a Jew) with enough material not only to defend himself against the blind, venomous Jews, but also to become the foe of the Jews’ malice, lying, and cursing, and to understand not only that their belief is false but that they are surely possessed by all devils. May Christ, our dear Lord, convert them mercifully and preserve us steadfastly and immovably in the knowledge of him, which is eternal life. Amen.”

What a contrast! One moment I am being inspired by a fortress that reminds me of the greatness of God, the next I am being reminded of the painful truth that men are sinners – all with the same song. How could the words of one man inspire both the Church and the Nazi party at the same time? 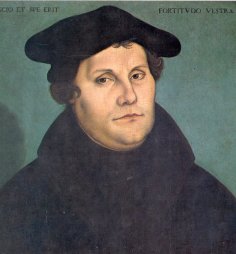 Martin Luther wrote “A Mighty Fortress” based on Psalm 46:11, “The LORD of hosts [is] with us; the God of Jacob [is] our refuge. Selah.” God is our refuge and our hope in time of trouble. The Psalmist also said, agreeing with Luther,

What are we to make of this, then? Is my hope in God supposed to be dashed all because of the actions of some (or all) of his followers? Are we to assume the truth of God is a lie because of the hateful words of Luther, as opposed to his hymns and 95 theses? Martin Luther was terribly wrong in his observations of the Jews. For that matter, David wasn’t perfect, either. No, God is God. Man is man. That is why it is so important to keep in mind the following words from the Apostle Paul:

When Peter got it right, Jesus called him “blessed” and praised the fact that the Father gave him the words (Matthew 16:17). However, when Peter spoke in the flesh, out of his own selfish desires, Jesus said, “Get thee behind me, Satan!” (verse 23). When we speak out of hand about God, that does not change the truth about God.  Luther got some things right.  Luther also got some things wrong in a very bad way.

My God IS a mighty fortress…and He loves the people of Israel.  He has made that abundantly clear, despite the ramblings and false doctrines of men. God said, “And I will bless them that bless thee, and curse him that curseth thee: and in thee shall all families of the earth be blessed.” – Gen 12:3 KJV  Nothing has changed.  Let God be true, and Luther be a liar. Let God be true, and Peter a liar. Let God be true, and every one of us a liar. God is Who He is, whether we get it right or not. But because of Luther’s mistaken words, may we be ever more diligent to heed these words:

Study to shew thyself approved unto God, a workman that needeth not to be ashamed, rightly dividing the word of truth. – 2Ti 2:15 KJV

Why? Because Jesus said it right, and He ALWAYS got it right, when He said, “Sanctify them through thy truth: thy word is truth.” – Jhn 17:17 KJV

Every word of God proves true; he is a shield to those who take refuge in him. Do not add to his words, lest he rebuke you and you be found a liar. – Pro 30:5-6 ESV

One response to ““Let God be True, and Luther a Liar””