By now you’ve probably heard of the accusations against Supreme Court nominee Brett Kavanaugh. It has been alleged that he sexually assaulted a woman (Christine Ford) more than 35 years ago while in high school.

What makes this so frustrating is that no one in their right mind would want to belittle or scoff at any woman’s claim of being assaulted, yet the circumstances surrounding the release of this information is patently suspicious. The indignation shown by Kavanaugh’s political adversaries at the suggestion the release of the accusation at this particular time is nothing more than a political stunt is rather laughable – except it’s not at all funny.

It has become known that Dr. Christine Ford (the accuser) has been very active in promoting liberal causes and the political left. It is also obvious that what supposedly happened 35 years ago could have been brought to the attention of authorities at any time during Judge Brett Kavanaugh’s rising career, one that has had to endure six FBI background investigations (count them – SIX!) and multiple U.S. Senate confirmation hearings. But now that Kavanaugh is poised to become a key personality on the Supreme Court, coincidentally right before a potential shift in congressional control, an accusation of assault comes out.

So, yeah, I’m not the only one who is skeptical. 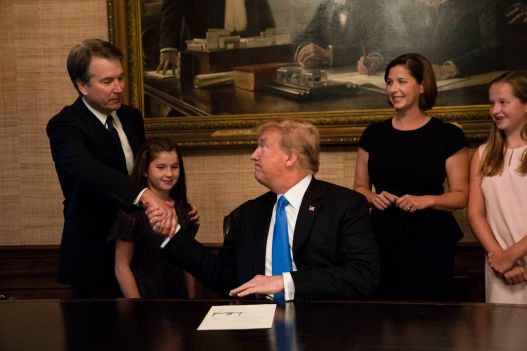 Judge Brett Kavanaugh shook President Trump’s hand, so he must be the worst person in the world. Obviously.

Which brings me to the point of my writing this morning: I’ll never run for office.

If you did any of the above, then odds are – according to Left – you’re a lawbreaking abuser with an unpredictable temper unfit for public office. If you run for office, or if you’re nominated for any critical position in government, people from your past will come out of the woodwork to accuse you of things you don’t even remember, and that in itself will be a testament to the fact that you are cold and uncaring, blind to the wounds you cause others.

It was in first grade I threw a rock on the playground and hit a girl. It may or may not have been an accident, but I can’t remember. As punishment, I was called into the Superintendent’s office and made to apologize, then was told to give her a hug and a kiss to prove I was sorry. That was in 1972. Should I run for office, I’m sure that the story would come out that I assaulted a young girl and then participated in unwanted sexual advances. Even more, I would then be made to answer questions about why I did not report me being asked to sexually assault the young girl. I wouldn’t doubt that an investigation would be launched into the private school I attended, and any other related offenses would be linked to me because I had never publicly opposed them.

I was only 5 or 6 years old, but who cares? That’s politics. And I didn’t even tell you what happened when I was a teenager!

And that’s why I’ll never run for office.