“Stand in awe, and sin not: commune with your own heart upon your bed, and be still. Selah.” – Psalm 4:4 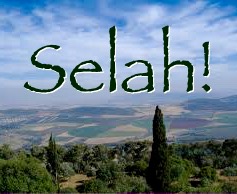 Selah. A musical notation calling us to pause, to rest for moment and consider what has just been said. In this verse we are told to “commune” with our own hearts upon our beds. What about? Let’s think about it.

Before the previous selah in Psalm 4:2, David was asking the question “How long?” How long would those whom he had once trusted betray him? How long would his former friends treat him like an enemy. How long would they promote lies over truth, and turn his “glory into shame?”

You and I may not be kings in exile, or have former commanders in our personal guard out for our head. However, there may be people who lie about you; spread untruths about you at work; misrepresent you to your children; or withhold that little bit of evidence just to win their case against you. How long will they get away with it?

You observe the culture. You watch the news and see the movies. You shake your head with disgust as you witness sin and shame, practically every deviancy known to man, promoted like it was the new gospel. You narrow your eyes and grit your teeth and whisper under your breath, “They should be glad I’m not God.” How long will God let them get away with it?

The word translated both as “awe” and “angry” is an interesting one. Consider Strong’s treatment of it:

So, when David is telling us to stand in “awe,” he is not telling us to do something like look up to the stars and go, “WOW!” No, David is giving us permission, as Paul did, to be angry; angry to the point of violently shaking, full of emotion and rage.

So, just to make it clear, it’s OK to get angry, just as long as it’s a righteous anger (the last thing we want to be found guilty of is a lack of emotion when confronted with perversion and injustice; apathy is its own sin).  But in an apparent contrast with the later writing of Paul, what does King David suggest we do?

Go to be and think about it? He said, “…commune with your own heart upon your bed, and be still. Selah.”

But wait! I thought the Apostle Paul said we shouldn’t go to bed angry? What’s the difference?

The difference is GRACE, pure and simple. And hallelujah for that!

Go ahead, get angry at the sin of the world. Go ahead, tremble with indignant anger at the way the glory of God is impuned on a day-to-day basis. Go ahead, quiver and shake with anger over the way people have been treating you – you have that right. But there’s something else you need to do: Remember the grace of God.

No, David is not telling us to go to bed angry and stew on it; he is encouraging us to remember that we are sinners, also.

To “commune with your own heart” means to reflect on yourself and your own condition. And when we add to that the words “be still” (דָּמַם [dā·mǎm]), which according to some* carries with it the idea of wailing and lamenting, along with being silent, what we have is the suggestion to be angry, but to remember we are sinners, too.

When David was treated horribly, he got angry, but he also remembered that if it wasn’t for God’s mercy he would suffer the same fate as the wicked. So, although we should get angry, at times, it is important for us to remember that although God is righteous, He is also gracious and good.

Thank Him for His mercy as you commune with your soul, and let Him handle those other people. Selah.

One response to “We’re All Sinners. Selah.”