Bonhoeffer, In His Own Words

Seventy years ago in the early morning hours of April 8, 1945, a man of God, a theologian, a hero, was hung by the Nazis. His name was Dietrich Bonhoeffer.

Now that the new Nazis of the world are spreading their anti-Christian, anti-Semitic hate around the world, doing everything from forcing people to bake cakes to beheading them on a beach, I could think of no better way to honor a young pastor who gave his life in the fight for freedom and truth than to share some of his own words. Then again, maybe we could honor him by being more like him.

“Christian love draws no distinction between one enemy and another, except that the more bitter our enemy’s hatred, the greater his need of love. Be his enmity political or religious, he has nothing to expect from a follower of Jesus but unqualified love. In such love there is not inner discord between the private person and official capacity. In both we are disciples of Christ, or we are not Christians at all.” ― The Cost of Discipleship

“A pastor should never complain about his congregation, certainly never to other people, but also not to God. A congregation has not been entrusted to him in order that he should become its accuser before God and men.” ―  Life Together: The Classic Exploration of Faith in Community

“The fearful danger of the present time is that above the cry for authority, we forget that man stands alone before the ultimate authority, and that anyone who lays violent hands on man here, is infringing eternal laws, and taking upon himself superhuman authority, which will eventually crush him.”

“When Christ calls a man, he bids him come and die.” ― The Cost of Discipleship

Time to Tour the Camp

The following post contains GRAPHIC language and material and is NOT suitable for all ages.

In April of 1945 the Nazi concentration camp at Buchenwald was liberated. Just outside the camp were German civilians who refused to believe the atrocities they were told of actually happened. Therefore, something had to be done.

On April 15 allied soldier brought the residents of the surrounding community inside the camp for a tour. It took actually seeing the corpses of dead Jews, stacked like wood, for them to believe what they had heard. The average response was, “We didn’t know.” 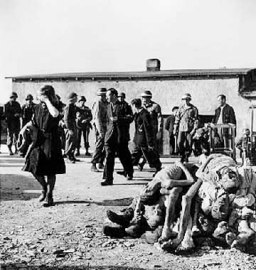 As we look back on those horrendous days, we find it hard to believe that the citizens of Buchenwald could actually go about their daily lives and never know anything about what went on inside those death camps. Yet, 40 years ago today, a virtual death camp was erected into law, the results being the slaughter over 50 million human lives, and people still deny the horror.

I believe it is time to tour the camp.

On Sunday the 20th I stood and proclaimed without compromise that I think abortion on demand is immoral and nothing short brutal murder. I publicly took that stand because of my belief that human life begins at conception, and that human life, especially the innocent in the womb, is precious.

Now, on the 40th anniversary of Roe vs. Wade, I want to state my conviction here. I know some of you will disagree, maybe even in anger. I know some of you will stop reading this blog. But I cannot remain silent about such a controversial subject all for the purpose of maintaining subscribers. People have to know how horrible the act of abortion really is.

I believe that, as with the citizens of Buchenwald, if more people were exposed to what actually goes on with the most common type of abortion, minds and hearts would change. The truth is so disturbing and sickening that I refrained from reading in my church what I am about to reveal to you, now.

The following lengthy quote describes how to perform a Dilation and Evacuation (D&E) abortion (82.3% of all abortions in 2009). Keep in mind less that 2% of abortions are done in the cases of rape, or for the need to save the life of the mother. The rest of the 1.5 million abortions performed in America are done other reasons – some of which are said to be in the baby’s best interest.

The surgical portion of a D&E abortion begins with the insertion of the speculum. “Late in the second trimester,” the NAF notes, “a weighted speculum accommodates larger fetal parts and allows more angulation of the forceps.”60 Throughout the procedure, “strong and steady traction” on the cervix must be maintained with a tenaculum.61 This allows forceps to be inserted through the dilated cervix for the dismemberment and removal of the human fetus. Ring forceps require a minimal cervical dilation of 10-12 mm, but are not sufficient for gestations beyond 17 to 18 weeks, when longer and weightier forceps must be used. The NAF reports that “Bierer forceps are the weightiest and largest-jawed [with] fenestrated and sharply serrated jaws (to) provide the most traction.”62 The NAF recommends that ultrasound guidance be used “in cases that require a considerable degree of force to remove fetal parts.”63 This helps ensure that the abortionist does not accidentally grasp and tear the myometrium (uterine wall) while grasping and tearing apart the fetus.

The National Abortion Federation instructions for a D&E abortion are as follows:

Once the forceps has passed through the internal os, open the jaws as widely as possible to encircle the fetal tissue and avoid pushing fetal parts deeper into the fundus… After 16 weeks’ gestation, fetal skeletal development is such that the surgeon can manually sense the presence of fetal parts within the closed jaws… After grasping a fetal part, withdraw the forceps while gently rotating it. This maneuver brings the fetus into the lower uterine segment before the grasped fetal part is separated (if necessary) and removed from the cervix… If a fetal extremity is brought through the cervix without separation, advance the forceps beyond the extremity to grasp part of the fetal trunk. Bringing the fetal trunk into the lower segment markedly reduces the number of instrument passes into the fundus… During the procedure, try to identify and keep track of fetal parts as they are removed. A “pouch’ or surgical pan at the edge of the gable to catch fetal parts can assist this process.64

Warren Hern, who the NAF credits as being an “American innovator”65 in D&E technique, offers the following instruction:

It is better to use smaller forceps and take smaller amounts of tissue each time than to deliver fetal parts intact while traumatizing the cervix… At 16 to 17 weeks, fetal tissue is much more easily identifiable with the forceps and in some ways is easier to grasp and remove than in earlier gestations. The [skull] is about the size of a Ping-Pong ball and usually can be grasped readily with the Bierer. Collapsing it gives a definite sensation… At 18-19 menstrual weeks… fetal parts are significantly larger and more difficult to morcellate (tear into pieces)… [Abortion after the] 20-week gestation… can be a significantly more difficult procedure accompanied by unnerving hemorrhage. Forceps use must be sure and relatively rapid. There is frequently not much time for exploring the nuances of different tissue sensations. Grasping and collapsing the [skull is] often difficult. Stripping the [skull] of soft tissue is sometimes the first step in successful delivery of this part, followed by dislocation of parietal bones. In this case, care must be taken in removal because ossification is occurring and the edges are sharp… Regardless of the amount of dilatation, delivery of the [skull] and pelvis is sometimes difficult… The advantage obtained by having a softened cervix could become a disaster if a laceration develops at the level of the internal os as the result of too much force… The procedure changes significantly at 21 weeks because the fetal tissues become much more cohesive and difficult to dismember. This problem is accentuated by the fact that the fetal pelvis may be as much as 5 cm in width… [The skull] can be collapsed. Other structures, such as the pelvis, present more difficulty… A long curved Mayo scissors may be necessary to decapitate and dismember the fetus, since it may be impossible to apply forceps or to do so while avoiding the thinned-out cervix.”66

After the abortion takes place, fetal parts must be examined “to verify complete evacuation.”67 A foot of the aborted fetus is often measured to “estimate gestational age after abortion.”68 Postoperative observation lasts for an hour or more so that the patient can be observed for “bleeding or pain that may signal uterineatony, retained tissue, disseminated intravascular coagulopathy, or uterine perforation.”69

For too long the media has avoided the reality of what goes on when a baby is aborted. If more people would read the above description they would refuse to allow this to go on. The argument, “Well, it’s just a lump of tissue,” would become absurd.

Please, before anyone starts screaming about the mother’s choice, do you think she would choose abortion if she could actually understand what goes on? If it is so horrible of a procedure, then why not tell her, unless of course we want her to stay in the dark, like the citizens of Buchenwald? Do we not care for the “health” of the mother?

It has taken many years for Germany to recover from what she did to the Jews and many others in those concentration camps. I can’t imagine the nightmares that came after witnessing the results of Hitler’s “final solution.”

But for women who have an abortion, there are also scars. I know this has been a long post, and one I am sure will result in the deletion of some hateful and vulgar comments, but I would like to leave you with one more quote…

Dr. Julius Fogel, an obstetrician-gynecologist and psychiatrist who performed more than 20,000 abortions during his career, perhaps explained best the psychological situation confronting many women after an abortion. He states, “There is no question about the emotional grief and mourning following an abortion. It shows up in various forms. I’ve had patients who had abortions a year or two ago … but it still bothers them.… There is no question in my mind that we are disturbing a life process.… Often the trauma may sink into the unconscious and never surface in the woman’s lifetime.… [But] a psychological price is paid. I can’t say exactly what. It may be alienation, it may be a pushing away from human warmth, perhaps a hardening of the maternal instinct. Something happens on the deeper levels of a woman’s consciousness when she destroys a pregnancy. I know that as a psychiatrist” (McCarthy, 1989).[1]

God, please have mercy on this nation. Many “do not know what they do.” Open their eyes. Help them to see. Change their hearts. Heal the wounded.