Five years ago, today, a man drove around in his convertible Mustang and shot up my hometown. His goal was to kill as many servicemen as possible, so first he drove by the recruiting office on Lee Highway and unleashed a hail of bullets into the glass-fronted building. The “No Weapons” sticker applied to both serviceman and citizen alike, so no one was able to stop him before he drove off.

I stood here and wept as I took this picture. Note the green marks where spent shell casings lay.

The next place he went to was the Marine Corp/Navy Reserve training facility on Amnicola Highway, right between the community college so many of us have attended (where my youngest daughter will attend this year) and the riverfront bike trails and pavilions so many of us have enjoyed.

There the Muslim terrorist – for that is what he was, and that is what he intended on being – once again began firing on unarmed Marines and sailors with his high-powered semi-automatic rifle. At least one Marine had unofficially brought his personal sidearm with him that day and tried to stop the terrorist, but to no avail. Before long four Marines lay dead.

A Navy sailor would later succumb to his wounds.

The local police in Chattanooga sped to the location where the terrorist was committing murder and engaged him with their own weapons.

Bullets from the conflict left holes in buildings as far away as the Coca-Cola offices across the highway and not even in view of the firefight. But before long, the self-proclaimed jihadist lay dead, too.

Within the hour my city was the focus of world-wide attention. Terrorism had come to the South, and it was worth noting.

But what was also worth noting was the righteous indignation of our citizens, and the flickering flames that dared the enemy of freedom to fan us into a raging fire! We were shocked by what happened, but we were far from terrorized; we Tennesseans aren’t the type to retreat from a fight!

It wasn’t long before the first American flags started appearing at the two places where gunfire was exchanged.

In no time there were hundreds, and then there were thousands. Flags and mementos too numerable to count turned into defiant monuments to those who died protecting our freedom. 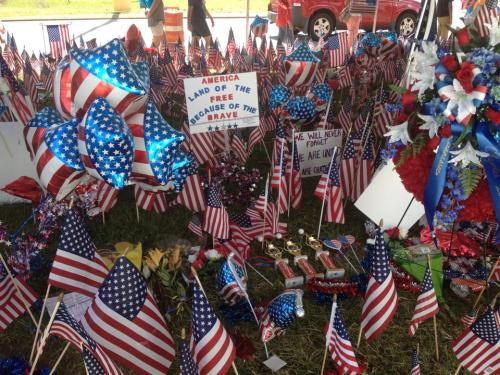 Tents were erected to shelter the thousands upon thousands of flags, letters, and memorabilia from the weather.

It wasn’t long before black, white, and every other color and faith united arm-in-arm as family, as Chattanoogans… as Americans.

In short, terror didn’t have it’s desired effect; it had the opposite!

Skip forward 5 years. What happened to the unity?

Unfortunately, we are now divided more than ever. What the terrorist couldn’t do with his guns, politicians and the media, with weapons of jealousy, anger, lies, and hate, are succeeding.

Racism and accusations of racism, the erasing of our history by those with no understanding of history, and constant fear and suspicion over the spread of a virus are shattering our Union. Unconquerable from without, we are being destroyed from within.

Chattanooga, are you still strong?

Then let us come together once again as Americans, or else the “fallen five” will have fallen in vain.