On Burning Burberries and Babies

Waking to the News

I don’t advise it, but it’s something I do often … I wake up to the news.

Honestly, the first thing I should do before rolling out of bed in the morning is pray or read a verse of Scripture. Yet, because my phone is my alarm clock, and because there’s usually a message that pops up right after I turn off the alarm, I habitually (may addictively) take a quick look (just a peek) at what’s happened overnight or the big news story of the day.

This morning, besides the incessant drum of anti-Trump rhetoric and the usual “Russian collusion” vitriol, there was a story about a clothing retailer that burned $37 million of its own over-stocked inventory.

And the masses rose up in protest. 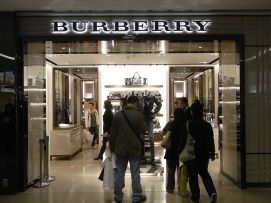 Now, if you do most of your shopping at “off-the-rack” stores like I do, especially when items are on clearance, you’ve probably never even heard of Burberry. Again, if you’re like me, it is highly unlikely you’ve paid 3,000 dollars for a coat, so Burberry’s products are probably not hanging in your closet.

So, if you are a commoner like me (or just refuse to spend a lot of money on designer clothing), what Burberry does with their overstocked inventory couldn’t matter less in my mind. However, when the news came out that the British fashion label incinerated $37 million dollars worth of their clothes rather than let it fall into the hands of discounters or the “grey market,” a true meltdown ensued.

Many cried, “Why couldn’t they just give the clothes to the poor?” Others, like Sheena Raza Faisal at the website “Jezebel” wrote: “Let me be clear—the label literally burned fashion and cosmetic products carrying the Burberry trademark, because capitalism is a nonsensical loop of wastefulness.” Oh, the horrors of making a profit. Most just saw the whole thing as a waste of good merchandise – $37 million dollars worth.

But what are we really talking about? Are we talking about the burning of clothing that could have been offered to employees of Burberry or given to the coatless poor, or are we just upset that we didn’t get a chance at snatching up something for free?

Think about it, there’s something more offensive when we hear of expensive things being destroyed as opposed to inexpensive things. If Ferrari or Porche disclosed that it was going to reduce its inventory by crushing fifty $200,000 cars a month, you and I would be sickened. But if Ford announced that it was going to do the same with fifty of its units, each of which worth no more than $30,000, we’d barely sniff out a complaint.

The reason Burberry can charge so much for its products (i.e., $1,350 per coat) is because of low volume, high demand, and brand exclusivity (the very thing anti-capitalists complain about but love to wear). The $37 million dollars worth of merchandise equates to around 20,000 coats.

Had the same 20,000 coats retailed for only $50 each (like what I’d buy), we’d only be talking around a million dollars worth of merchandise burned. Sad, but not newsworthy.

Burberry’s clothing and makeup products are expensive because of limited quantity, high demand, and prestige. However, very little about these products differ from similar products produced by other companies – only the label.

On the other hand, every human life (inside or outside the womb) has intrinsic value. In other words, each of us – including the unborn – are valuable despite anything else. We are valuable because of Who designed us, Who created us, and Who already set the price for us on the cross of Calvary.

People are up in arms because around 20,000 coats (and makeup) were destroyed last year. Yet, last year in the U.S. alone, around 600,000 or more babies (estimated) were destroyed in the womb. At least that’s down from a million in 2011. Yay. Woohoo.

And what do the “Jezebel”-like folk think about all THAT waste?

6 responses to “On Burning Burberries and Babies”