Was John R. Rice a Heretic?

Back in 2011 I wrote what has been my #1 most visited post. As far as I know, I’ve never re-posted it…until today. Therefore, the following is a slightly updated rendition of the “classic.” Enjoy!

In the meantime, this morning (April 6, 2016) I’m going to be preaching to the student body of Bryan College, Dayton, TN. Prayers appreciated.

I would like to pose a question to my brothers and sisters who refuse to recognize any other translation: Was John R. Rice a heretic? If you don’t know of whom I am referring, let me give you a little background information.

Dr. John R. Rice (d. 1980) was one of the most well-known fundamentalist writers and evangelists of the 20th century. He wrote more than 200 books and booklets which were published in many languages and sold all over the world. He condemned the compromise, liberalism, and apostasy being taught at major denominational colleges and seminaries, and fought for a return to holiness and the fundamentals of the Christian faith. But what I think he will always be remembered for is his founding of the weekly paper, the Sword of the Lord.

For the record, I highly respect Dr. Rice, and my personal library contains several of his works published back in the 1960’s. However, even though Dr. Rice was a great preacher and author, he was not flawless; he said some things back in the day that I have a hard time with. On the other hand, he also said some things that would shock the average reader of Sword of the Lord, especially those who believe the KJV is the one-and-only perfect, preserved text for the English-speaking world.

Unlike the Sword which continually decries any other translation as dangerous and confusing, Dr. Rice actually recommended the 1901 ASV. (OK, would somebody get a glass of water for the fainting KJV-only person on the floor?) Dr. John R. Rice, founder and editor of the Sword of the Lord newspaper, actually said that the…

“…American Standard Version, translated in 1901, is perhaps the most accurate of all versions… It takes advantage of the three great manuscripts – the Sinaiticus, the Vatican, and the Alexandrian manuscripts – which were not available when the King James Version was translated.”   from, Dr. Rice, Here Is My Question (Wheaton: Sword of the Lord, 1962), p. 59.

As an overall explanation of his beliefs on the topic of multiple translations, Dr. Rice also stated:

“[There] are many, many translations. The differences in the translations are so minor, so insignificant, that we can be sure not a single doctrine, not a single statement of fact, not a single command or exhortation, has been missed in our translations. And where the Word of God is not perfectly translated in one instance, it is corrected in another translation. And if the Word of God is not perfectly portrayed in one translation, it is portrayed, surely, in the winnowed sum of them all… Have copyists passed on to us any major errors so that in any particular matter we miss the Word of God? There is abundant evidence that they have not. Do the various translations differ materially on any doctrine, any fact of history, any Christian duty, on the plan of salvation, or the Person of Christ, or any comfort or instruction? No, they do not! God has preserved His Scriptures. – from, Our God-Breathed Book, the Bible (Murfreesboro, TN: Sword of the Lord Publishers, 1969), p. 355.

Now, according to many legalists, at least to those who refuse to read or use any other translation of the Bible than the King James 1611, Dr. Rice, who had probably been one of their heroes, is now a liberal. What a shame! He did so much!

I believe that God inspired His Word (2 Timothy 3:16). I believe He gave it to us in the original autographs. I believe that He has preserved copies of those originals in the examples we have of Greek, Hebrew, and Aramaic manuscripts. What I do not believe is that the King James Version was the one-and-only, forever-settled-as-pure-and-inspired translation. It is ONLY a translation. To say that no other English translation is the Word of God is to say that the Geneva Bible, 51 years older than the KJV, was just a book.

The Kings James Version of the Bible changed the world. We should all be grateful for it. I still use it many times when preaching, and especially when memorizing verses. But even though the KJV was and is a blessing of God, His Word is preserved in the ORIGINAL TEXTS. Anything other than the original languages, including the King James, is a translation.

Our goal should be to use the best translations of the texts at our disposal when we are preaching and teaching, comparing them with each other and the originals, when possible, so that we can better understand how God’s Word should be understood in today’s language. After all, if you can’t understand it, doing you no good is the least of your worries – doing harm because of a faulty understanding based on a changed vocabulary is far worse. That is where the REAL heresy comes from. 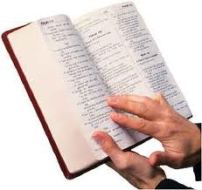 But hey, it doesn’t matter which translation, if you are not reading it and studying it on your own, you might as well be reading Harry Potter and the Temple of Whatever.

READ your Bible. STUDY your Bible. Let the Holy Spirit guide you as you read and study. If you do, several wonderful things will happen: you won’t be ashamed in the end (2 Timothy 2:15); you will find light for your path (Psalm 119:105); and you will know how not to sin against God (Psalm 119:11). Even the ASV, ESV, HCSB, or the NIV will tell you that!

4 responses to “Was John R. Rice a Heretic?”