Several years ago, just after the second gulf conflict broke out, the town I was living in lost its first son. On December 30, 2006, Sgt. John Michael Sullivan was killed by a roadside bomb. Only 22, he left behind a wife and baby who was born the day after Sgt. Sullivan died.

I will never forget the visitation at the funeral home. Soldiers stood guard at each end of Sgt. Sullivan’s casket. One soldier was a West Point cadet. Every thirty minutes they would rotate out, similar to the way the guard is changed at the Tomb of the Unknown in Arlington. The honor and respect was palpable.

Folks in the southern United States don’t take kindly to disrespect – especially at the funeral of a fallen soldier. Sgt. Sullivan died while taking a friend’s place on patrol, which made him a genuine hero. He was a local boy. So, when it was rumored that protesters from Westboro Baptist Church were going to be protesting, blood began to boil.

Standing guard outside the funeral home, standing shoulder-to-shoulder, were motorcyclists (over 200 hundred of them) holding American flags. They lined the street and sidewalks as far as anyone could see. Each one, wearing leather vests,  seemed as tough as the Harleys they rode.

I won’t give names, but I heard a couple of high-ranking officials discussing the protesters. They knew Westboro’s hateful tactics and what typically went on at other funerals. So, in a whisper not meant to be overheard, one official said to another, “If those ———-‘s show up, just turn your back – let the guys outside handle them.”

Westboro never showed up. They must have gotten word.

Some people talk a big talk, but never walk the walk. Some people brag about what they would do in a given situation, such as combat, but never volunteer to prove it. But as Sgt. Sullivan lay there in his casket, no words were needed; his sacrifice proved his courage – and love. 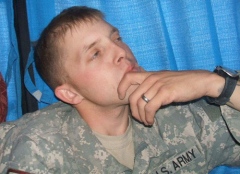 Scripture says, “Greater love hath no man than this, that a man lay down his life for his friends” (John 15:13). Others may say they love their friends, but the silent soldier in front of me didn’t have to say a word.

As I paid my respects, it struck me how this young man had essentially given his life for me, a stranger. Like so many other men and women we remember on Memorial Day, Sgt. Sullivan willingly took another’s place. He did what we could not.

The emotion I felt that day led me to write a song in Sgt. Sullivan’s honor. But it also honors of the One who gave His life so that we could be eternally free.

Here is “No Greater Love” as sung by my daughter, Katie (we just recorded it on the iPhone, so forgive the low quality).

(Note: Unfortunately, when I wrote the song, I didn’t know Sgt. Sullivan was actually 22. However, his mother, after hearing the song, told me it was OK.).

4 responses to “No Greater Love”