Observations from a Middle-Georgia Pastorate: Listen to the Locals

When I first traveled down to this part of Georgia, having no knowledge of what was around, I used a common term to describe the area. I told others it was “in the middle of nowhere.”

Since then, I have felt bad about saying that. First, unless Warthen was in the middle of nowhere – like some outpost in the middle of Antarctica – the term could be considered derogatory. Coming across as bigoted isn’t helpful.

Secondly, nowhere is actually nowhere; everywhere is somewhere because God is there. In reality, I’m right in the middle of where I’m supposed to be.

Listen to the Locals

But when it comes to getting around and finding what you need, the somewhere might not be “nowhere,” but finding anywhere when you’re there can prove difficult, if not leave you stranded with an empty gas tank and no filling station for miles. That is why before you start exploring, listen to the locals!

One of the first things that bothered me (and, I know, this is more of a first-world problem) was that there seemed to be no restaurants. My wife and I had pretty much resigned ourselves to the fact that there would be no nice place to go on a date. But what we came to find out was that if we were only willing to drive a few minutes, and if we were willing to trust our local guides, we would find exactly what we were looking for.

For example, last week a couple from our church invited us to join them for a movie and dinner. After the movie, they took us to a steak house. But if we had not trusted the suggestion of our new friends, we wouldn’t have even given the place a chance. I mean this place was the quintessential example of “hole in the wall.” It was literally a steak house. 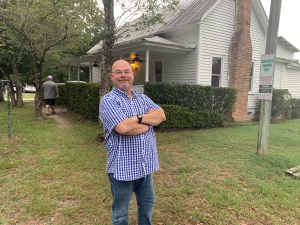 In front of Tumpies, the “Best little steakhouse this side of Texas.” It’s not too far away in Dublin, GA. It was a house built in the 1880s, but now a great place to eat!

But the food was some of the best I have ever had – ever. It will be a destination when we host friends from out of town.

Another thing that bothered me was that I didn’t think there were any coffee shops around. Again, when I listened to the locals I found out about a great coffee place not far away from where I will be meeting a new preacher friend every week to talk shop.

So, no, my place in the middle of Georgia might not be Nashville, Chattanooga, Atlanta, or the like, but it has everything I thought I was going to miss and everything I need. I mean, come on, it’s got steak and coffee!

Been Where We’re Going

You know, the children of Israel, under the leadership of Joshua, were faced with a similar situation when they were about to cross over the Jordan River. In chapter 3, the Lord told Joshua to send the Levites and the Ark of the Covenant ahead of the people. The reason was pretty clear.

“But keep a distance of about a thousand yards between yourselves and the ark. Don’t go near it, so that you can see the way to go, for you haven’t traveled this way before.” – Joshua 3:4 (CSB)

Think how much time and effort I saved after listening to the locals who’ve lived in this little town for years and years! How much more would all of us benefit if we’d just trust the One who’s already been where we’re going?

If you can trust the locals, you can certainly trust the Lord – He knows where everything is.

5 responses to “Observations from a Middle-Georgia Pastorate: Listen to the Locals”